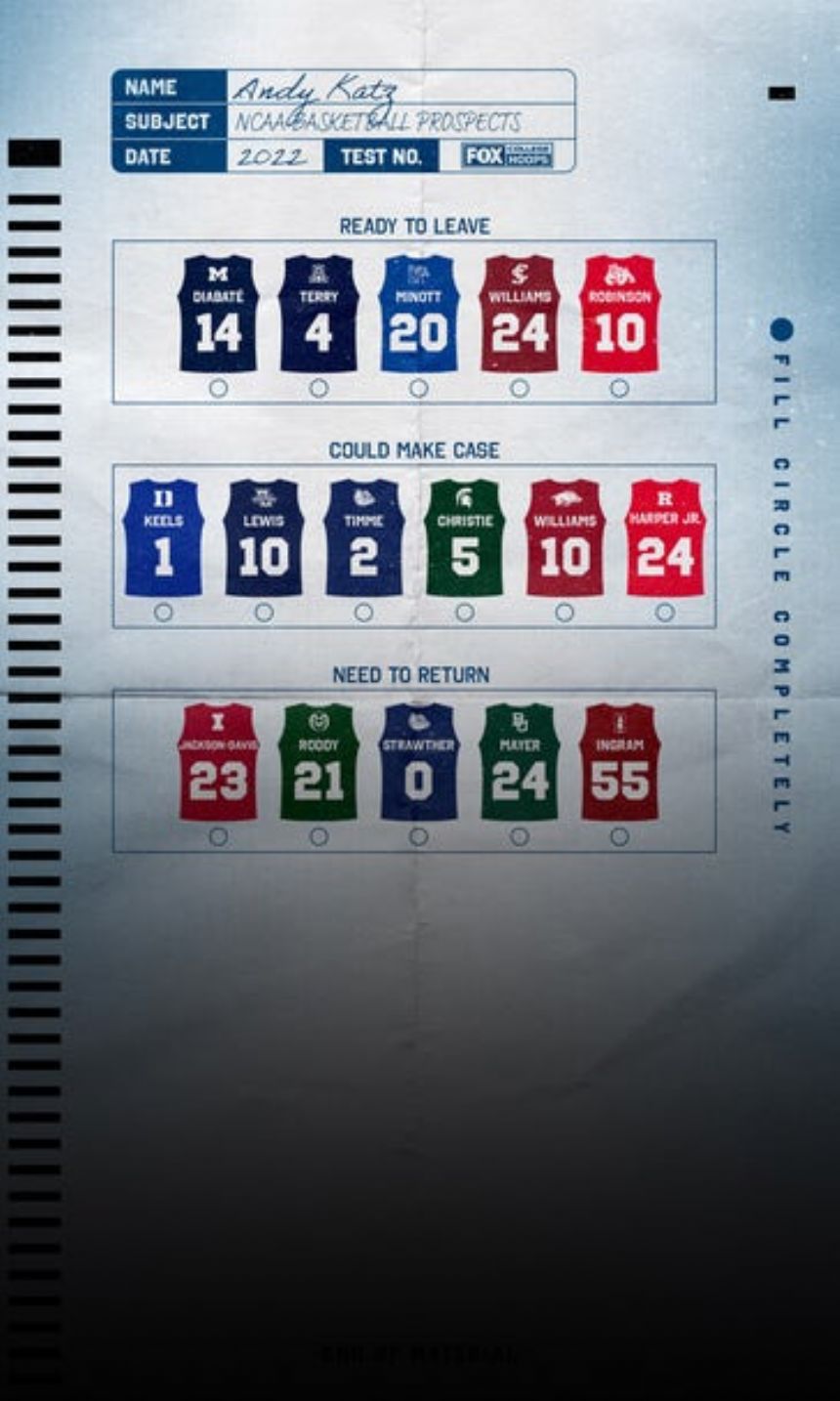 The NBA Draft and G-League Elite Camp will be held next week in Chicago.'

Getting an invitation should be an indicator that you have a chance to be selected in the draft, but it's hardly a lock. A number of players have left the door open on returning to college. They've got until June 1 to make that final decision.

For this week's tiers, I'll take a look at three groups of players who have been invited to the combine - those who are ready to leave, those who could make a case to be drafted, and players who I think should return to school in 2022-23.'

Moussa Diabate, Michigan: Diabate is the type of athlete the NBA loves to develop. He's long, can protect the rim, runs the floor well and is a sponge. He could easily climb into the first round and be a workout wonder.'

Dalen Terry, Arizona: Terry scored 17 in the loss to Houston in the Sweet 16. Terry could have been more consistent this past season. But he will likely turn some NBA teams in his favor during workouts.'

Josh Minott, Memphis: Minott doesn't have the numbers, but he has the shot-blocking, rim-protecting and overall athleticism to woo NBA suitors. He's going to have plenty of workout wins to be a first-round pick.'

Jalen Williams, Santa Clara: Williams was an 18-point scorer and a 51% shooter on a solid Broncos team that was a pest in the WCC. He's going to be one of those players whose stock continues to rise during the draft process.

Orlando Robinson, Fresno State: The 7-footer averaged nearly 20 points and eight boards a game. He's the type of big who will find his way into the first round the more he works out for teams. He'll be a name that gets more play as we get closer to the draft.'

Tier 2: Could make a case

Trevor Keels, Duke: Keels is going to be an intriguing case. He has the body and the shot to be a possible first-round pick. But if he came back, he could join the No. 1 recruiting class and be that experienced guard to help lead the Blue Devils to a possible Final Four. It's not a slam dunk he stays in the draft.

Justin Lewis, Marquette: Lewis flamed out in the NCAA Tournament loss to North Carolina with only six points, but he has had good moments, like posting 28 in a critical win over St. John's. Lewis has the size and scoring ability to be under consideration.

Drew Timme, Gonzaga: Timme doesn't need to prove anything else in college basketball. Could he sway a team to take him in the second round? Sure, but it's not a sure thing. He could come back to Gonzaga, be a National Player of the Year candidate and earn plenty with NIL.

Max Christie, Michigan State: Christie isn't going to listen to me, but he needs to come back and prove he can be a consistent shooter. He might leave because that was likely the plan when he arrived at Michigan State. But he wasn't able to be a consistent standout for the Spartans. He could be a workout wonder but needs more game action to be a sure thing.

Jaylin Williams, Arkansas: Williams had double-doubles in a win over Gonzaga and a loss to Duke. He showed his versatility in the NCAA Tournament. He could be the type of tweener that gets solid buzz. If he returns, he'll be in competition for SEC Player of the Year.'

Ron Harper Jr., Rutgers: Harper Jr., has played four seasons at Rutgers and given everything to the Scarlet Knights. He has proven he can make big shots and has overcome some of his athletic deficiencies. If he comes back, he'll be a Big Ten Player of the Year candidate.

Trayce Jackson-Davis, Indiana: TJD is a college star. He scored 29 in the win over Wyoming after 31 in a Big Ten Tournament loss to Iowa. But, TJD could be the Big Ten Player of the Year, a National Player of the Year candidate and prove that he should be a lock for the first round in 2023. He's not now.'

David Roddy, Colorado State: Roddy has the numbers to leave. He has been a Mountain West Conference Player of the Year. But he's not a lock for the first round. If he were to return to Fort Collins, he would have a chance to lead the Rams back to the tournament, be the Player of the Year again and ensure he can be a first-round pick.'

Julian Strawther, Gonzaga: Strawther isn't ready to be a first-round pick - or maybe even a second-rounder. If he returns to lead the Zags he could improve his stock tremendously.'

Matthew Mayer, Baylor: Mayer has never been a double-digit scorer at season's end. He has one more season to use in college. He should take the year and try to elevate himself one more time.'

Harrison Ingram, Stanford: Ingram didn't wow during his only season at Stanford. He will get workouts and has the potential to show well. But he needs to be a standout performer and give it one more go to be a go-to guy.'