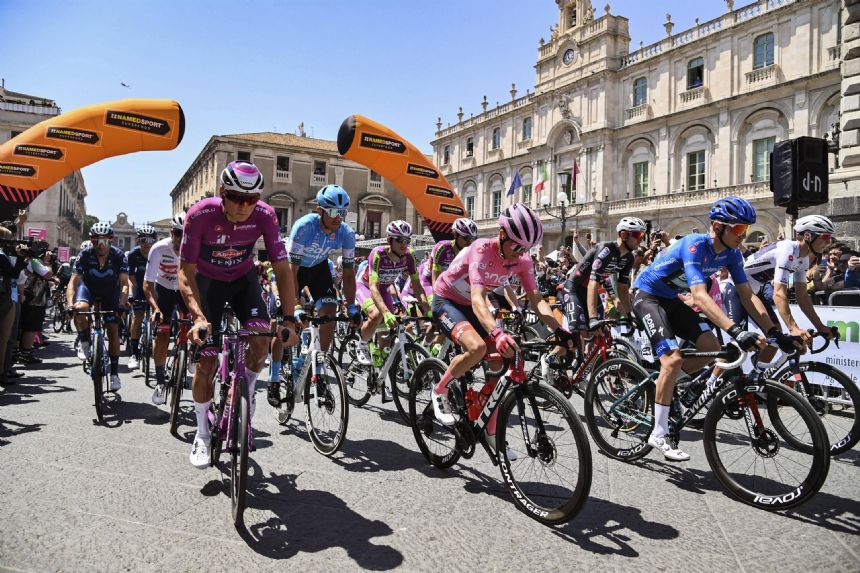 MESSINA, Sicily (AP) - French cyclist Arnaud Demare won a bunch sprint at the end of the fifth stage of the Giro d'Italia on Wednesday and Juan Pedro Lopez kept hold of the leader's pink jersey.

Demare, who rides for Groupama-FDJ, edged Fernando Gaviria at the end of the 174-kilometer (108-mile) route from Catania to Messina after sprint favorites Mark Cavendish and Caleb Ewan had been dropped earlier in the day. Giacomo Nizzolo was third.

Demare also struggled on the climb but his team managed to eventually get him back to the peloton.

Most of the overall contenders crossed the line together. Lopez maintained his 39-second advantage over Lennard Kämna. Rein Taaramäe was third, 58 seconds behind Lopez.

Five riders escaped early in the day but they were caught after 100 kilometers (62 miles). The main drama happened on the only climb of the day, a second-category ascent up to Portella Mandrazi.

With Cavendish and Ewan dropped, the peloton upped the pace and they were unable to catch up.

Cavendish's Quick-Step Alpha Vinyl team put in a solid effort but the high speed of the peloton eventually forced them to give up hope of closing the gap.

The day finished earlier than most to allow the teams to take the ferry to the Italian mainland for Thursday's sixth stage from Palmi to Scalea, along a mainly flat 192-kilometer (119-mile) route with a fourth-category climb early in the stage.

The Giro finishes on May 29 in Verona.