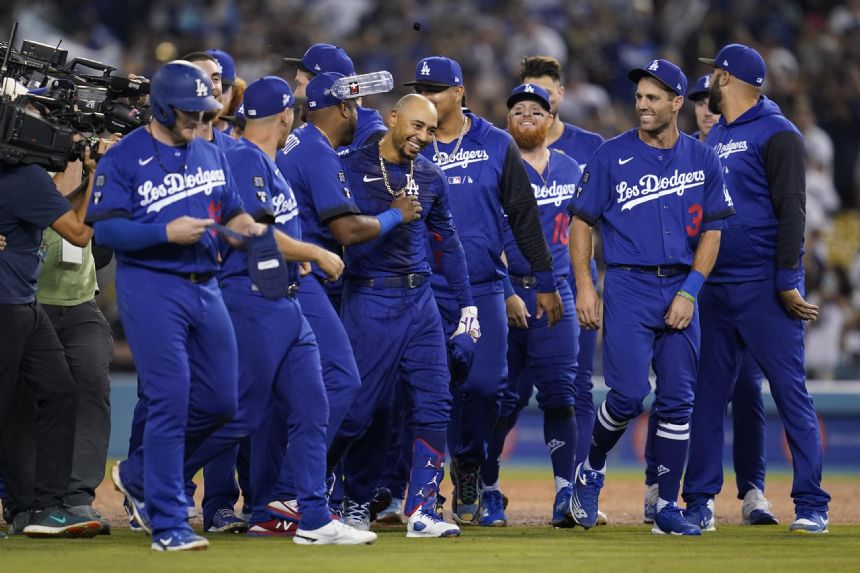 The Dodgers didn't take the lead until Arizona starter Zac Gallen left after eight innings. He struck out a career-high 13.

Craig Kimbrel (6-6) got the win despite again struggling in the ninth.

Christian Walker slammed a 435-foot shot into the left-center field pavilion - his 36th homer overall and sixth against the Dodgers this season - for a 2-1 lead against Kimbrel.

Gallen retired the first 11 batters he faced, striking out five in a row. He struck out the side in the eighth. The right-hander allowed one run and two hits in a career-best eight innings.

Cody Bellinger doubled to the warning track in right leading off the ninth against Reyes Moronta (1-1). After Trea Turner grounded out to third, Freddie Freeman was intentionally walked. Will Smith loaded the bases on an infield single that diving shortstop Geraldo Perdomo kept from reaching the outfield.

Joe Mantiply came in to face Muncy, who hit a slow roller to third that scored Bellinger for a 2-all tie.

Dodgers starter Julio Urias gave up one run and three hits in 5 1/3 innings. The left-hander struck out five and walked one.

Gallen gave up a pair of two-out hits - a triple by Smith and an RBI double by Muncy - that allowed the Dodgers to tie it 1-all in the fourth.

In the ninth, the Dodgers challenged Kimbrel hitting pinch-hitter Jake McCarthy with a pitch leading off. After a review, crew chief James Hoye announced the call stood.

McCarthy thought he'd stolen second to put the go-ahead run in scoring position, but another replay review overturned the safe call. Walker then came to the plate and put the D-backs ahead on a 2-2 pitch from Kimbrel.

Dodgers: RHP Tony Gonsolin (forearm) threw to hitters in an up-and-down bullpen using his entire pitch mix. "The stuff looked good," manager Dave Roberts said. "My eyes were telling me it was a really good effort." The All-Star and 16-game winner will throw another bullpen in a couple of days. ... RHP Blake Treinen (shoulder) won't throw again until Saturday and see how he responds. "He's frustrated. He's not bouncing back," Roberts said. ... RHP Brusdar Graterol (elbow) was activated off the IL. ... LHP David Price (wrist) threw a simulated inning to hitters. "He looked good. He was letting it go," Roberts said.

Turner went 0 for 4, including two strikeouts, to snap his 18-game hitting streak.

Turner also had another streak end. He had reached base safely in each of his last 47 games against the D-backs, the longest current streak for any active batter against any team.

Diamondbacks: Hadn't announced a starter for Friday's opener of a three-game series against San Francisco.