Don't expect a shootout between Steelers and Browns, plus other best bets for Thursday 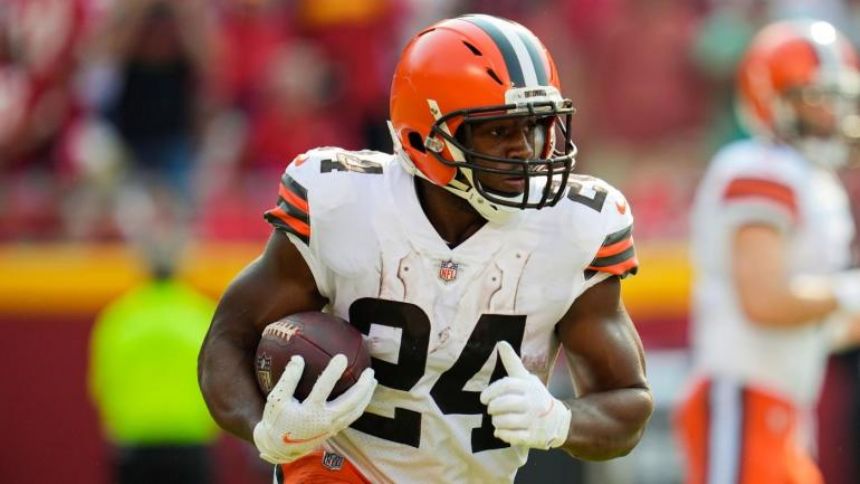 Hello, it's me, Tom Fornelli, and after being gone for the last week, it feels good to be back in your inbox. It also felt good to walk the dog this morning because not only is today the first official day of fall, but where I live, the weather cooperated. After weeks of humid, 80-degree days, when I stepped outside with the dog this morning, it was mostly cloudy with temps in the mid-50s. There was a stiff breeze blowing, and it smelled like fall.

It was glorious. Fall is my top season. You've got all the best sports going and the best weather. I'll hear an argument for spring, but that's all. If you're out here trying to argue for summer or winter, you're either still in school (summer) or anti-social (winter).

Give me fall 365 days a year. Oh, and give me these stories too. Honestly, I've missed so much in the world of sports over the last week that I've got a lot of reading to catch up on myself.

Keeping things simple last Thursday worked out well for us, and I'm not changing the formula this week. Neither one of these teams has shown us a lot offensively. The Steelers have been especially anemic, ranking 28th in the league in offensive success rate and 26th in points per drive. I'm not expecting Mitch Trubisky and company to figure things out tonight against a Cleveland defense that's been excellent to start the year. Especially with a woeful offensive line.

The Browns' offense has been better than Pittsburgh's and ranks sixth in the league in points per drive, but that's a number likely to come down if it doesn't improve on a down-to-down basis. Their offensive success rate of 42.4% ranks only 16th, and they've struggled finishing drives, scoring touchdowns on 55.6% of their red zone possessions.

Another factor is how the clock churns when the Browns have the ball. They put together long drives while running 54.7% of the time, which is the third-highest rate in the league. In other words, Pittsburgh's offense can't score, and Cleveland's offense never lets the clock stop. Throw those two forces up against solid defenses (both are top 10 in success rate), and we aren't likely to see a shootout tonight.

Here's what SportsLine is saying about the game:'SportsLine's Emory Hunt is 11-3 in his last 14 picks involving the Cleveland Browns and he's got a play on the spread in tonight's game.

The Pick: Nick Chubb Anytime TD (-145) --'It's a heavy price to pay, but as I've mentioned, the Cleveland offense is one of the run-heaviest in the league. With Jacoby Brissett at quarterback and the Browns favored, I don't anticipate that changes much tonight. That only increases the odds of Nick Chubb getting some red zone and goal-line carries. While he hasn't had a lot of success against Pittsburgh in his career (he's averaged only 4.37 yards per attempt and scored one touchdown in seven career games), I like his odds of hitting paydirt tonight.

The Browns have already scored three rushing touchdowns in the red zone this season and broken six tackles. Their 3.57 yards per carry in the red zone is the fourth-best mark in the league. We could get vultured by Kareem Hunt, but I think this price on Chubb scoring is friendly.

West Virginia at Virginia Tech, 7:30 p.m | TV: ESPN
The Pick: Under 50.5 (-110) --'West Virginia is scoring 46 points per game, but trust me when I tell you that is misleading. First, the Mountaineers scored 65 points against Towson. In two games against Pitt and Kansas, the Mountaineers are averaging 36.5 points per game. That is still pretty good, but Kansas's defense has been pretty bad, and Pitt's defense hasn't looked great, either. This Virginia Tech defense will be the best one West Virginia has seen. It's ranked 9th in the country in success rate, 13th in points allowed per drive, and 10th in EPA per play. It's good.

What's not nearly as good is the Virginia Tech offense. If I were to use adjectives to describe it, I would go with "depressing," or maybe even "abominable." It ranks 100th in success rate, 116th in success rate and 95th in EPA per play.The listed total for tonight's game is giving a little too much credit to West Virginia's offensive performance against bad defenses. We are taking this under as long as the total is over 49.

Key Trend:'The under is 5-1-1 in the last seven meetings.

?? SportsLine Pick of the Day:'There's more college football on tonight and SportsLine's Micah Roberts has a play on the game between Illinois and Chattanooga.