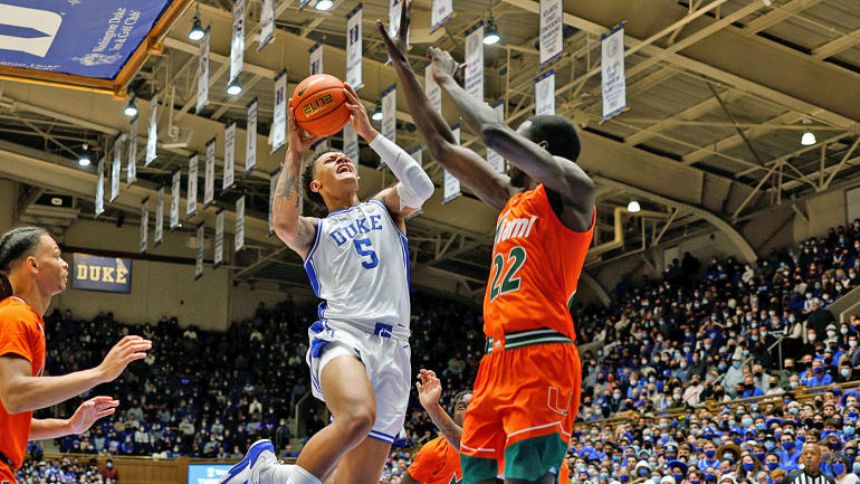 An ACC battle takes center stage when No. 8 Duke (12-2) travels to take on Wake Forest (13-3) in a Wednesday night affair. The Blue Devils had their five-game win streak snapped on Saturday as Duke was upset at home by the Miami Hurricanes and fell 76-74. Meanwhile, the Demon Deacons narrowly escaped and beat Syracuse 77-74 in an overtime battle.

Tip-off is at 7 p.m. ET from LJVM Coliseum. Duke is favored by six points in the latest Duke vs. Wake Forest odds from Caesars Sportsbook, while the Over-Under is 151.5. Before locking in any Duke vs. Wake Forest picks, be sure to see the college basketball predictions and betting advice from SportsLine's proven model.

Now, the model has set its sights on Duke vs. Wake Forest and locked in its picks and predictions. You can visit SportsLine now to see the model's picks. Here are several college basketball odds and betting lines for Wake Forest vs. Duke:

Freshman forward Paolo Banchero has played well in his first season as a Blue Devil. Banchero is leading the team in scoring (17.5) and rebounds (7.5) as the Washington native has scored 20-plus in four games thus far. He has also registered two double-doubles. The best game of his young career came in the Nov. 22 victory over Citadel as Banchero finished with 28 points, eight rebounds, and six assists.

Sophomore center Mark Williams provides the Blue Devils with some force down low. He is averaging 8.8 points and 6.3 rebounds while shooting 67 percent from the floor. Williams is also first in the ACC with 3.1 blocks per game as the Virginia native has recorded six blocks in three different games. In the loss to Miami (FL), Williams had 12 points, seven rebounds, and six blocks.

Senior guard Alondes Williams has been one of the best players in the ACC. He is currently second in scoring (20.4) and first in assists (5.1). The Wisconsin native had three games with more than 30 points and also logged a triple-double thus far. Williams played a great game in the overtime win over Syracuse as he finished with 25 points, 12 rebounds, and four assists.

Junior forward Jake LaRavia is second on the team in scoring (14.9) and rebounds (6.2). He is also currently fourth in the ACC in field goal percentage (.597). The Indiana native scored in double figures with at least seven boards in four straight games. In the win over Florida State, LaRavia had 22 points, seven rebounds, and five assists.

SportsLine's model is leaning over on the point total, projecting the teams to combine for 153 points. The model also says one side of the spread hits in almost 60 percent of simulations. You can only see the model's picks at SportsLine.