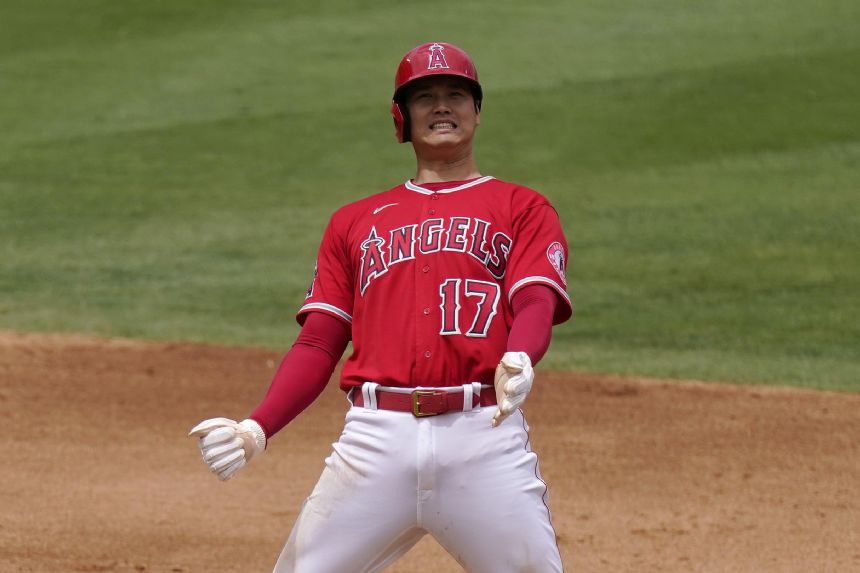 Texas took three of four from the Angels and went 5-6 on its season-high, 11-game road trip.

Shohei Ohtani and Brandon Marsh had two hits apiece for the Angels, who dropped three of four and went 6-18 in July.

The Rangers got their first three aboard in the ninth on Leody Taveras' base hit and Jose Quijada (0-3) issuing walks to Jonah Heim and Adolis Garcia. Duran then cleared the bases with a double to the right-center field gap off Raisel Iglesias.

Brock Burke (5-2) came on in relief of starter Dane Dunning and pitched two scoreless innings. Jonathan Hernandez retired the side in the ninth for his first major league save.

Detmers went seven innings and struck out a career-high 12 while allowing two runs, one earned, on three hits.

The Rangers quickly got to Detmers with a run in the first. Marcus Semien drew a leadoff walk, stole second and scored when Nathaniel Lowe had a hit up the middle.

The Angels tied it in the home half of the frame on Luis Rengifo's RBI single to plate Ohtani. The AL MVP reached with a triple down the right-field line.

Los Angeles had the bases loaded with none out but could only get across one run on a sacrifice fly by Andrew Velazquez.

The Rangers evened it at 2 in the fifth. For the third time in the series, they took advantage of an Angels' left fielder having problems playing balls hit into the corner when Charlie Culberson doubled down the line and took third when Marsh misplayed it. Culberson scored one batter later on Elier Hernandez's sacrifice fly.

Rangers: SS Corey Seager (lower right leg contusion) was out of the lineup for the third straight day. A stint on the injured list is a possibility after he is re-evaluated on Monday. ... IF Brad Miller (neck strain) began a rehab assignment at Triple-A Round Rock.

Angels: 3B Phil Gosselin was in the lineup after leaving Saturday's game when he was beaned in the third inning. ... IF David Fletcher got a day off after playing in three straight games following his return from the injured list. Fletcher was on the IL for nearly three months due to a left hip strain.

RHP Jimmy Herget was activated off the injured list after missing 30 games due to right shoulder impingement. In a corresponding move, right-hander Chase Silseth was optioned to Triple-A Salt Lake.

Angels: Begin a three-game series against Oakland on Tuesday. RHP Noah Syndergaard (5-8, 3.83 ERA) is listed as the starter, but he has been the subject of trade speculation as Tuesday's deadline draws near.