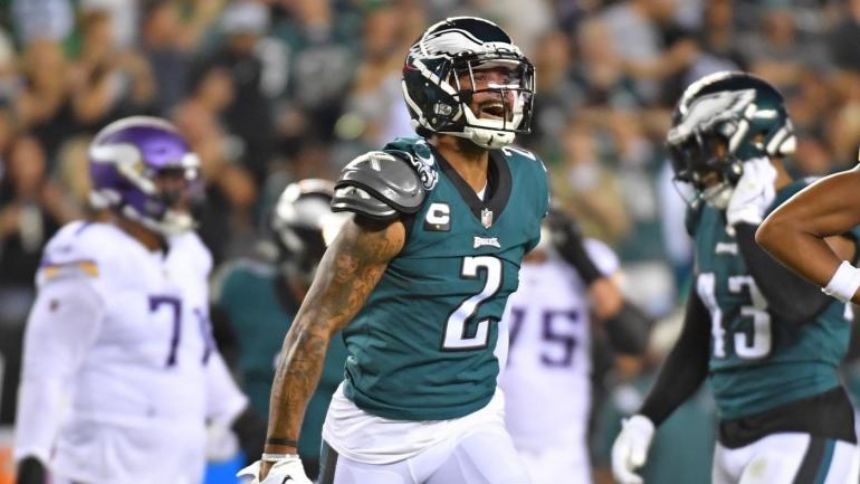 PHILADELPHIA -- Darius Slay has heard the chatter on social media. When the best cornerbacks are mentioned in the NFL, Slay's name is typically omitted from the list.'

Perhaps it's because Slay is 31 years old -- an age when cornerbacks are typically past the prime of their career. If Slay proved anything, he defied father time on the primetime stage.'

Tasked with covering Justin Jefferson throughout the night, Slay turned in an All-Pro performance against who he calls the second best receiver in football (he said Davante Adams was the best). Targeted eight times as the primary defender in coverage, Slay allowed just two catches for 19 yards and finished with two crucial red zone interceptions off Kirk Cousins in the Philadelphia Eagles' 24-7 victory over the Minnesota Vikings.'

Cousins had a 0.0 passer rating targeting Slay. If Slay wasn't getting the respect as one of the best cornerbacks in the game, he is after shutting down Jefferson on the national stage.'

"I ain't one of them guys. I'm still at an elite level. I deserve a lot of respect. I think the league respects me enough, it just be the media."

Jefferson, who was held to just six catches for 48 yards on the night, was shut down by Slay throughout the evening. He just had one catch when Slay was covering him, as Cousins was intercepted twice in the red zone as a result.

"I knew I was going to get that from him," Jefferson said. "I mean, he's a great cornerback. he's a great player. A great guy, too. We definitely could have had some more opportunities out there to score and put up points -- and we just didn't."'

Slay's getting the respect amongst his peers, but his performance Monday night may have swayed the media's vote on how good he is. Usually slighted amongst the elite cornerbacks, Slay's been targeted 17 games in two games and allowed just five completions. He's allowed just 74 yards in coverage as the primary defender, as opposing quarterbacks targeting him have a paltry 19.6 passer rating with two interceptions.'

Finally with a good cornerback next to him in James Bradberry, the stage is set for Slay to have his best season at 31 years old. Slay and the Eagles secondary passed the first true test against Minnesota's high-powered offense -- one that scored just seven points against a much-maligned Eagles defense that gave up 35 points in Week 1.'

The best may be yet to come.'

"You see what they're capable of doing," Slay said. "But we got talented guys, too. We got a good group. We're going to continue to keep working and we're ready for any challenge. That's what we're all here for -- to be the best."'