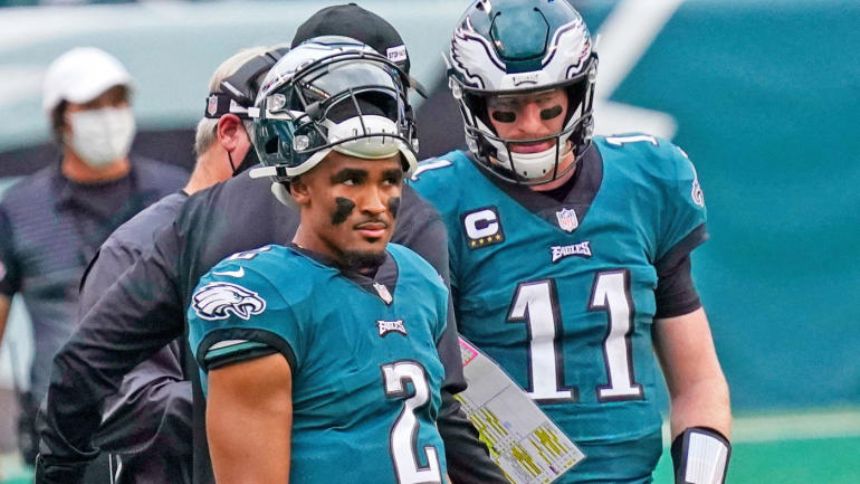 Jalen Hurts is answering all the questions whether he can be the Philadelphia Eagles' franchise quarterback through the first two games, raising the expectations of a franchise that was pretty optimistic heading into the year. The Eagles having a young and productive quarterback with a talented roster is something Donovan McNabb experienced when he was leading the franchise 20 years ago -- and what Carson Wentz went through when he was the team's franchise quarterback.'

The Eagles moved on from Wentz after he asked for a trade, turning the franchise over to Hurts. McNabb thinks Philadelphia is better off, saying Hurts is a better quarterback than Wentz right now.'

"People need to look at Hurts' experience and how he got to this position. We're seeing him being able to put the pressure on his shoulders and being able to move forward with his head high," McNabb told Zach Gelb on AP Sports Radio Thursday night. "The change of the offense is better suited for Jalen Hurts."

Hurts has certainly evolved as a passer, as evidenced through his first two games. He has completed 69.8% of his passes for 576 yards with one touchdown and one interception (97.1 rating), while leading the NFL in total offense (pass yards + run yards - yards lost to sacks) and yards per attempt (9.1). Hurts also has 28 carries for 147 yards and three touchdowns -- and his 13 touchdown runs are the most for any quarterback since the start of last season.'

Wentz is off to a strong start in Washington, completing 65.5% of his passes for 650 yards with seven touchdowns to three interceptions for a 100.3 passer rating. Not only is Wentz tied for the league lead in touchdown passes, he's the only player with 10 completions of 20-plus yards this year.'

Both quarterbacks have been playing well to start the year, raising expectations for their respective franchises. The Eagles are suddenly getting discussed as an NFC contender, yet McNabb wants to see more.'

"I wouldn't so call it say Super Bowl right now," McNabb said. "I think they'll be a strong NFC East contender, being able to win the NFC East. I'm looking forward to them possibly making it and advancing to the second round. And at that particular point, as a player, you know you need a little bit luck and an extra push to get you over the hump.'

"But I definitely see them a playoff team, a team that will be a little up and down over the regular season. There will be some highs and some lows, but I think they're strong enough from an experience standpoint, from the players, to be able to overcome a lot of the adversity they'll face this year."