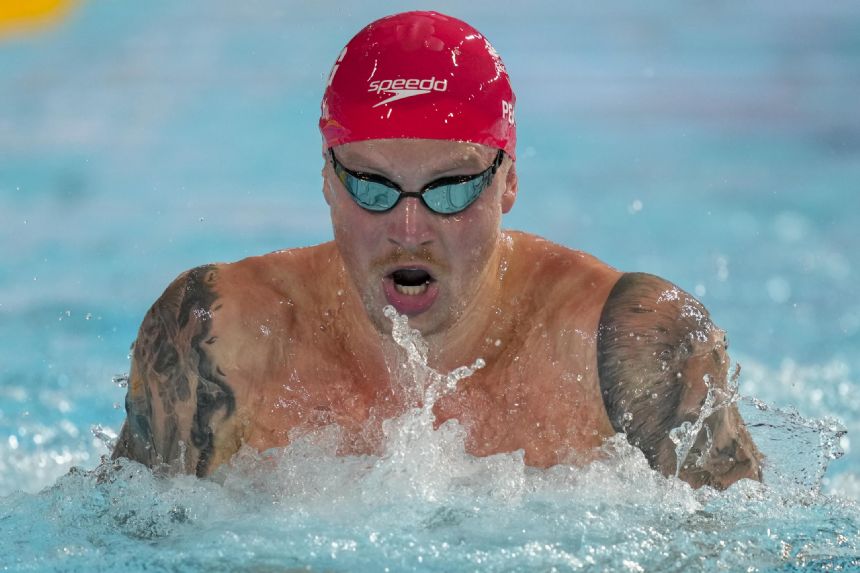 BIRMINGHAM, England (AP) - Champion swimmer Adam Peaty is planning a reset after the Commonwealth Games in hopes of regaining his best form for the Paris Games in 2024.

The reigning Olympic champion and world record holder in the 100-meter breaststroke was devastated to miss a medal in the event in a major upset on Sunday night.

It was the first time the 27-year-old Englishman, who finished fourth despite leading at the halfway point, has been beaten in eight years and also the only major final he has lost in the event.

Peaty broke his foot 10 weeks ago and missed the world championships in Budapest as a result. But he is dealing with a broader malaise, he said.

"I only raced two meets before this championship and it just exposes you," he said. "That's the training aspect and then you've got ... Do I love the sport as much as I did? I don't know.

"So I've got those questions on my mind. How can I maximize these next two seasons to potentially do what I need to do in Paris?"

The eight-time world champion qualified for the semifinals of the 50-meter breaststroke on Monday morning but feels he needs a reset to regain his focus.

He said difficulties related to COVID-19, with the Tokyo Olympics postponed and held a year later, and other challenges have taken a toll.

"I haven't really had a winter block where I've reset, got my aerobic training in and gone, 'Hold on a minute'," he said.

"I haven't even had a chance to know where I am going. It's almost like you get in a car without a destination."

England's Chris Murray enjoyed a perfect weightlifting session when setting a new Commonwealth Games mark in a dramatic final of the 81-kilogram class on Monday.

The 23-year-old Murray claimed the gold medal with a total of 325 kilograms with his combined snatch (144kg) and clean and jerk (181kg).

But he then watched as Kyle Bruce appeared to have seized the gold when the judges gave the Australian's final attempt at a combined lift of 327kg three white lights for approval.

A closer assessment from the jury ruled that Bruce, who settled for silver, had slightly bent his elbow in breach of competition rules before straightening his left arm again.

Canadian Nicolas Vachon opted for the heaviest weight in the clean and jerk of 187kg and also looked to have seized the gold, only to drop the bar behind him at the final moment.

While frustrated to come so close to claiming the gold medal, Bruce said the overrule was correct.

"A lot of people at home who don't know weightlifting that well and don't know the rules would be yelling and cheering and saying, 'Wow. That is the gold. He has got it. He has got it,'" he said.

"Some people wouldn't understand that, but as a weightlifter, those are the rules and I understand that and need to work on that. I have to go back to training and do better."