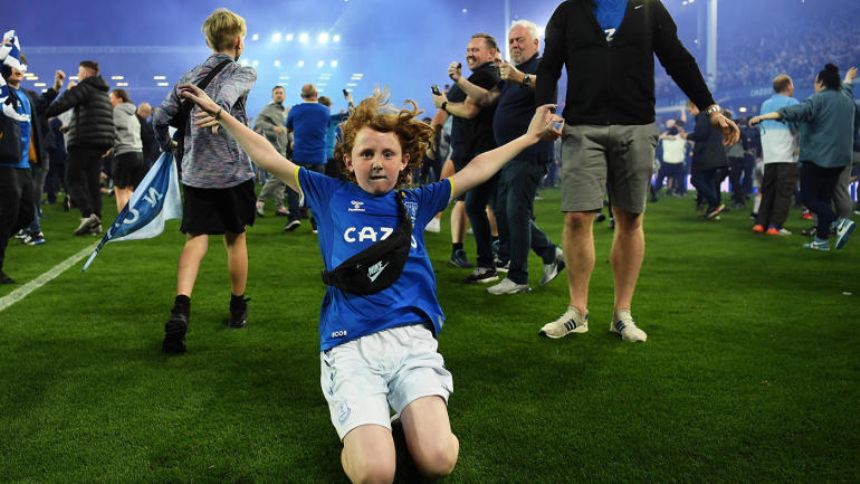 Goodison Park delivered one of the biggest moments of the Premier League season on Thursday when Everton fans stormed the field to celebrate an come-from-behind 3-2 victory over Crystal Palace to guarantee three points Premier League safety ahead of the final matchday of the season.

Only needing a victory to escape the relegation zone, Dominic Calvert-Lewin capped a second half that saw the Toffees rattle off three unanswered goals to storm back into Premier League survival in improbable fashion. You could see how much that goal meant to the Everton fans as they stormed the field in the 85th minute -- before the game even ended -- to celebrate the go-ahead goal.'

The PA announcer had to advise fans to leave the pitch and return to their seats as it caused seven minutes of extra time to be added. But the elation could be felt around the entire stadium as safety was secured Thursday. It would have been a massive disappointment to see a club as proud as Everton to fall out of the Premier League for the first time in 68 years. And blue side of Merseyside were 35 minutes away from it, had it not been for Michael Keane's savvy strike in the 54th minute, Richarlison's scrappy finish in the 75th and Dominic Calvert-Lewin's thumping header 10 minutes later.

The match began with worry as Jean-Phillipe Mateta opened the scoring for Crystal Palace in the 21st minute. Jordan Ayew doubled the lead in the 36th minute but he shouldn't have been on the pitch after his challenge on Anthony Gordon only two minutes later. With a little more force, the tackle could've broken Gordon's ankle, but only resulted in a yellow card.

Frank Lampard must have delivered his most important team talk as Everton manager at halftime as they couldn't afford to enter the final day of the season facing Arsenal while still needing a victory. And he didn't only talk the talk, but also made an important tactical change to start the second half. Andre Gomes was removed from the match for Dele Alli to inject more energy into the team.

Belief returned to Goodison Park when Vitaliy Mykolenko's free kick found the head of Mason Holgate. He headed it down for Keane to run on knocking it past Jack Butland for the opener. In the 75th minute, sheer determination from Richarlison secured the equalizer. Going to the ground and surrounded inside the box, the Brazilian's sliding kick with the help of a deflection found the back of the net.'

We are level at Goodison Park!

Richarlison's shot takes a deflection and we are set up for a fascinating finish on @USA_Network! If Everton win they are officially safe from relegation.#EVECRY pic.twitter.com/WvGmdwGqln

That goal set the stage for magic from Calvert-Lewin. It has been a trying season for Everton but with the support of their fans and their manager adopting a different tactical setup, they were able to avoid falling to the Championship. While they'll need to build on their momentum for next season, Thursday is a night for celebration.

The escape is complete!

Everton have achieved Premier League safety after coming from 2-0 down to win 3-2.