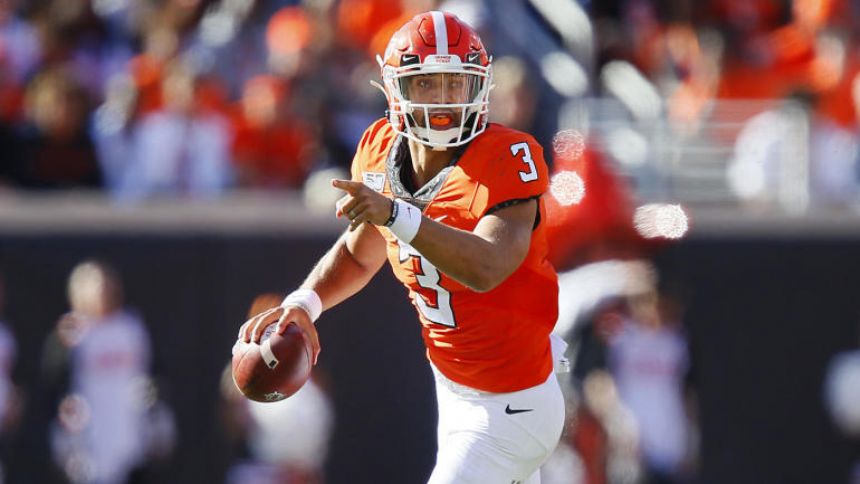 Kenny Pickett is the kind of success story in college football that has existed for decades but has become increasingly rare in recent years. He's a quarterback who showed up to campus without a lot of hype and didn't light the world on fire despite getting a chance to play early. But he kept playing, kept improving, and in 2021 it all came together. Pickett led Pitt to an ACC title, was named a Heisman finalist and ended up as the only QB selected in the first round of the 2022 NFL Draft.

It's a story that's been compared to what we saw with Joe Burrow, and while the similarities are there, some key differences also exist. First, Pickett was a three-star recruit and considered the 738th-best player in the 2017 recruiting class, according to the 247Sports Composite rankings. Burrow was a four-star and ranked as the No. 280 player in the 2015 class. Second, while Pickett played a little as a freshman in 2017, he was Pitt's starter for his sophomore season. Burrow didn't have a clear path to playing time at Ohio State and transferred to LSU, where he had an average season in 2018 before blowing up in 2019.

Burrow had only thrown 418 college passes before his senior season; Pickett entered the 2021 season with 1,177 pass attempts under his belt. Generally, you are who you are at that point, but Pickett took a giant step forward long past the point expected of him. It's a success story that has caused many fanbases around the country to take a look at their QB depth chart and wonder if the next Kenny Pickett might be on their team.

Odds are, he isn't. These days, the quarterbacks who end up as Heisman finalists or first-round picks show up on campus that way. They're five-star or four-star recruits who have been groomed for the moment since childhood. But that QB might be out there, and I have scoured the countryside to find him. The qualifications were easy enough. I wanted to find a veteran QB with plenty of game experience who has been just slightly above average during his career -- what we on The Cover 3 Podcast refer to as a JAG+ -- so a breakout would seemingly "come from nowhere." Also, I wanted to avoid players who were highly rated recruits out of high school. Not necessarily three-stars only, but no five-stars or high four-stars. What I ended up with are these five quarterbacks.

Which one will emerge as the next Kenny Pickett?

How perfect would it be for the next Kenny Pickett to be the player replacing Kenny Pickett? Slovis burst onto the scene in 2019 when he wasn't supposed to. He was a three-star recruit out of high school meant to be a backup for five-star recruit JT Daniels. Then Daniels suffered a knee injury, and Slovis was thrust into the starting role, where he excelled. He threw for 3,502 yards, 30 touchdowns and nine interceptions as a freshman. He played so well that Daniels chose to transfer rather than stay and try to win his job back. He might've? Slovis regressed the last two seasons and transferred to Pitt following the regime change at USC. While Mark Whipple has left for Nebraska, Frank Cignetti will run the Panthers offense, and he had success at Boston College with Phil Jurkovec.

Sam Hartman is the perfect Wake Forest quarterback because he's been pretty good for a while now, but nobody ever seems to notice. While I include him on this list, it's fair to argue that Hartman has already had his breakout season. After throwing for 33 touchdowns and 15 interceptions in his first three seasons (22 games), Hartman tossed 39 touchdowns and 14 interceptions for the Demon Deacons last year. Hartman also set career-highs in completion rate, attempts and yards while rushing for an additional 364 yards and 11 touchdowns. If he cuts down the turnovers in 2022, he could make a Pickett-like leap. Also, if you're wondering if I want to refer to it as a Pickett's Charge, I very much do, but Pickett's Charge didn't go well in real life, and I don't want to put those vibes on any of these guys.

When cooking up this idea, Clifford's name is the one that immediately came to mind. Honest. He's been a solid player for Penn State who has shown steady improvement each season, but he's done so when the Nittany Lions haven't played well overall. He seems to take the brunt of the blame from fans. Some of it is deserved, but a lot of it isn't. Last season, Clifford threw 109 more passes than any previous year and set career-highs in completion rate (61%) and passing yards (3,107). He's entering his second season under offensive coordinator Mike Yurcich, and it's the first time in his career he'll work with the same play-caller in consecutive seasons. If he can hold off young upstart Drew Allar, Clifford could be on the verge of a breakout in his fifth season.

While Hartman and Clifford can be considered dual-threats, Sanders is the most dynamic rusher on this list, providing him another avenue to succeed. He's rushed for 1,565 yards in his three seasons at Oklahoma State, but I include him for his potential growth as a passer. Sanders threw the ball more in 2021 than any other season and saw a dip in his efficiency. His completion rate dipped slightly, while his yards per attempt plummeted to 7.2, and he had the lowest efficiency rating of his career at 133.5. Of course, he also set career-highs in yards and touchdowns and nearly led Oklahoma State to its first Big 12 title since 2011. I don't know that he'll ever reach the point where he's considered a first-round pick by NFL teams, but it's not insane to believe Sanders can have the kind of season that garners Heisman buzz if he improves as a passer to add to his rushing ability.

In 2019, Tanner Morgan threw for 3,253 yards and 30 touchdowns while averaging 10.2 yards per attempt as the Gophers finished 11-2 and at No. 10 in the AP Top 25. Morgan was so impressive that season that I as a potential first-round pick. Then it all fell apart. Minnesota offensive coordinator Kirk Ciarrocca left for Penn State, receiver Tyler Johnson left for the NFL and COVID obliterated the Gophers' depth chart during the 2020 season. The 2021 season didn't go much better for Morgan, as Minnesota ran the ball more often than any team in the country outside the three service academies. Still, Morgan's completion rate of 59.6% was an improvement on 2020, and his yards per attempt climbed up to a respectable 8.2. Now, Ciarocca has returned to Minnesota with the same offense Morgan had success in during the 2019 season. While Ciarocca hasn't brought Tyler Johnson and Rashod Bateman with him, we could see Morgan take another step forward and closer to the player he was in 2019.

Finally, here are the career numbers of our five candidates compared to Kenny Pickett's career pre-2021. You can argue that they've been too good.