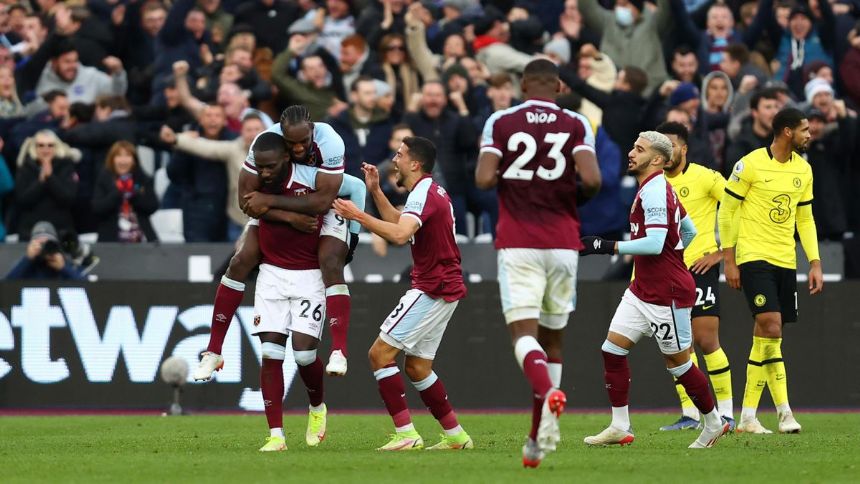 LONDON (AP) - A fluke goal by Arthur Masuaku in the 87th minute gave West Ham a 3-2 win over Chelsea on Saturday and loosened the visitors' grip on the Premier League lead.

Chelsea led twice through Thiago Silva's header and a sublime goal from Mason Mount, but West Ham came back both times with a penalty from Manuel Lanzini and Jarrod Bowen's low shot from the edge of the area.

And with just under four minutes remaining, Masuaku swung a speculative cross in from the left wing which veered toward goal and caught Chelsea goalkeeper Edouard Mendy by surprise. Mendy dove to keep the ball out but only managed to push it inside his own near post.

It left Chelsea just one point ahead of Manchester City and two in front of Liverpool ahead of their games later Saturday.

For David Moyes' West Ham, it was another impressive win after also beating Liverpool 3-2 at home in the league and eliminating both Manchester clubs from the League Cup. And it ensured the Hammers will remain in fourth place after this weekend.

Chelsea took the lead in the 28th minute when Mount swung over a corner and Silva's thumping downward header beat Lukasz Fabianski, who got a hand to the ball but could only touch it onto the inside of his far post.

Silva then had a crucial intervention at the other end, being in the right place at the right time to block Vladimir Coufal's shot on the line after it beat Mendy.

But West Ham was gifted an equalizer when Mendy made a mess of collecting a weak backpass from Jorginho and then had to bring Bowen down in the area. Lanzini then sent Mendy the wrong way from the penalty spot.

Mount restored Chelsea's lead a minute before the break when he met Hakim Ziyech's cross-field pass with a well-struck volley for his fifth goal of the season.

But Bowen leveled again in the 55th with a shot that went through the legs of a defender and past an unsighted Mendy and into the far corner.

Bowen came close to giving West Ham the lead but instead it was Masuaku's attempted cross that inflicted Chelsea's second defeat of the season.