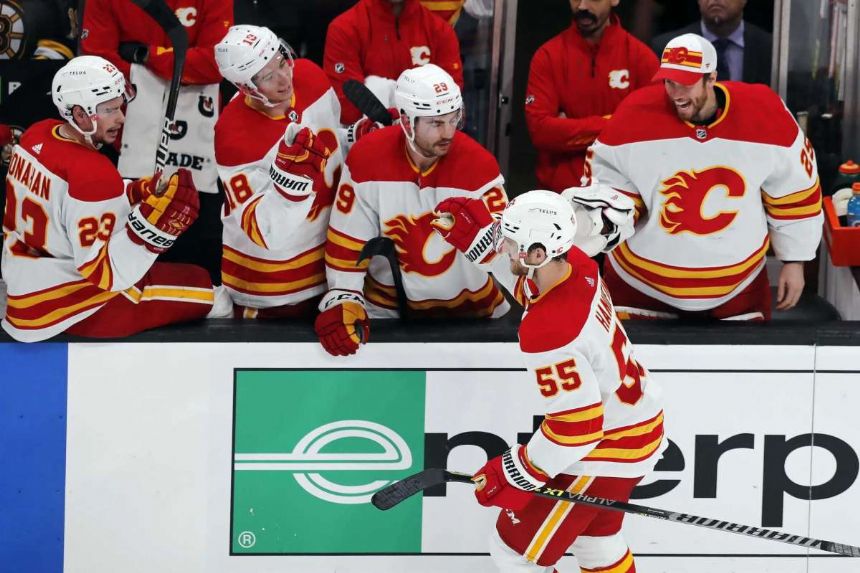 Johnny Gaudreau and Noah Hanifin, who both played collegiate hockey nearby for Boston College, each had a goal for the Flames, who posted their third straight win and improved to 9-2-2 on the road. Mikael Backlund also scored for Calgary, and Matthew Tkachuk had two assists.

Jeremy Swayman made 27 saves for Boston, taking first career loss at TD Garden after going 8-0-0. The Bruins had their three-game winning streak snapped, and it was just their second home loss in eight games.

It was the Flames' seventh shutout in 19 games.

The 24-year-old Vladar, a third-round draft pick by the Bruins in 2015, played five games with Boston last season before he was traded during the summer for a third-round pick in 2022.

Coming off a 5-2 victory over the Islanders in the first game at New York's UBS Arena on Saturday night, the Flames jumped ahead when Gaudreau one-timed the rebound of Juuso Valimaki's shot past Swayman from the right circle 1:29 into the game.

Gaudreau, who played three years at BC, won the 2013-14 Hobey Baker Award.

They made it 2-0 with a similar goal midway into the second. Swayman stopped Tkachuk's shot but the rebound went right to Hanifin, a former defenseman for BC, flipped it in 13:51 into the period.

Mangiapane scored his 15th of the season at 3:08 of the third after Swayman stopped two shots by Dillon Dube on a clean breakaway. Backlund made it 4-0 just 1:10 later.

THEY PLAYED HERE, TOO

Along with Vladar, Flames forwards Milan Lucic and Brett Ritchie also previously played for the Bruins. Lucic was on the Stanley Cup championship team in 2011 during his eight seasons in Boston, and Ritchie played with the Bruins in 2019-20.

NOTES: Flames C Elias Lindholm played his 600th career game. ... Bruins F Trent Frederic missed his fifth straight with an undisclosed upper-body injury. David Pastrnak got hit in the mouth with the puck but returned. ... Ritchie was sidelined for his 10th consecutive game with a lower-body injury. ... Gaudreau also hit the cross bar late in the opening period. ... Each of Boston's last three games were 5-2 victories.

Flames: Host Chicago on Tuesday in the first of a three-game homestand.

Bruins: At Buffalo on Wednesday.