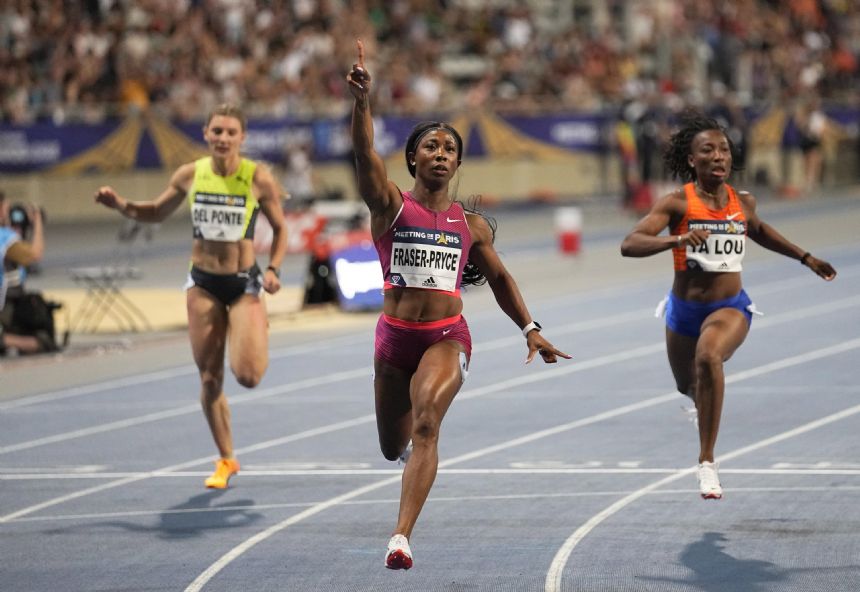 PARIS (AP) - Three-time Olympic gold medallist Shelly-Ann Fraser-Pryce equaled her world-leading time of the year in winning the 100 meters in 10.67 seconds at the Diamond League meet in Paris on Saturday.

She was unchallenged at Stade Charlety as she matched her time at the Kip Keino Classic in Kenya last month. She also beat Jamaican countrywoman and two-time reigning Olympic champion Elaine Thompson-Herah's meet record of 10.72, set last year.

The 35-year-old Fraser-Pryce will go for a 10th world championship gold medal in Eugene, Oregon, next month.

Winfred Yavi of Bahrain triumphed in the women's 3,000 steeplechase in a world-leading and personal best time of 8:56.55.

Olympic bronze medallist Yaroslava Mahuchikh also set a world-leading mark for 2022 in the women's high jump at 2.01 meters as she led a 1-2-3 for Ukraine with Iryna Gerashchenko and Yuliya Levchenko.

South African sprinter Luxolo Adams won the men's 200 commandingly in 19.82. Alexander Ogando of the Dominican Republic was second in 20.03.

American Devon Allen won the men's 110 hurdles in 13.16, and Nigerian Tobi Amusan clinched the women's 100 hurdles in 12.41 ahead of Bahamian Devynne Charlton.

Frenchman Benjamin Robert pleased the crowd with a late surge to overtake Australian Peter Bol and win the men's 800 in 1:43.75, while Ethiopian Selemon Barega cruised to victory in the men's 5,000 in 12:56.19.

Olympic champions Steven Gardiner and Shaunae Miller-Uibo of the Bahamas won the men's and women's 400, in 44.21 and 50.10, respectively.

Also, Olympic champion Valarie Allman won the women's discus with a meet record of 68.68 meters to beat the previous mark set by rival Sandra Perkovic of Croatia. Perkovic was second with a throw of 68.19.

Sweden hosts the next Diamond League meet in Stockholm on June 30.