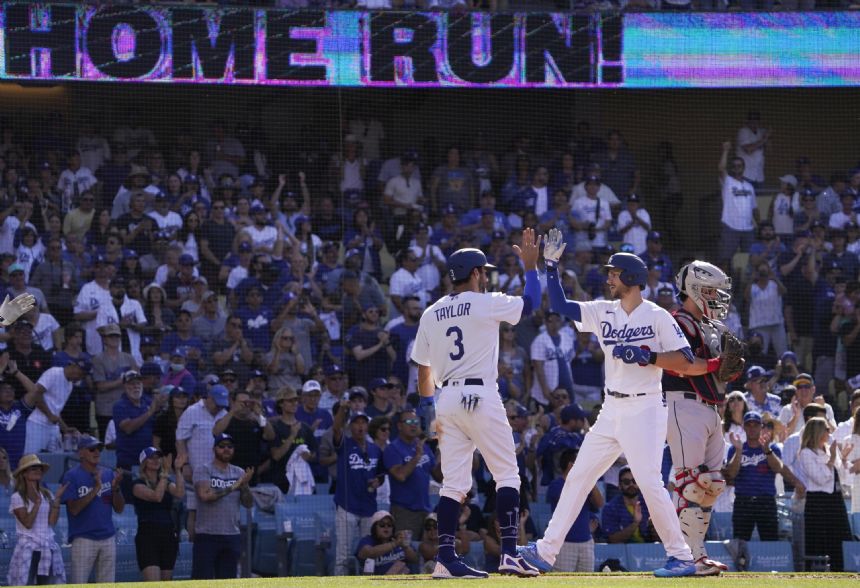 Julio Urias (4-6) pitched six strong innings to earn his first win since May 20. The left-hander, who had gone 0-3 with a 3.09 ERA in his last four outings, allowed an unearned run on two hits with six strikeouts and two walks.

It was a season low in hits for Cleveland, which was missing AL RBI leader Jose Ramirez due to right thumb discomfort. The loss snapped a season-best five-game winning streak.

While the Guardians had trouble generating offense, all of the Dodgers starters reached base, with five of their 11 hits going for extra bases.

After Austin Barnes' sacrifice fly scored Cody Bellinger to tie it at 1 in the second, Turner put the Dodgers up 3-1 when he drove a low changeup from Cal Quantrill (4-4) into the seats in left-center for his ninth homer of the season.

Quantrill allowed season highs with five runs and 10 hits. The right-hander struck out four and issued one walk.

The Guardians took a 1-0 lead in the first when Amed Rosario scored from second after a hard-hit grounder by Oscar Mercado went through second baseman Max Muncy's legs. That put runners at the corners before Andres Gimenez struck out to end the inning.

That would be the last time Cleveland would threaten. The Guardians had only two baserunners the remaining eight innings.

Urias, David Price, Phil Bickford and Reyes Moronta retired their last 12 batters after Rosario's double to lead off the sixth,

Los Angeles added two runs in the third on Justin Turner's RBI double and an RBI triple by Gavin Lux.

The Dodgers made it 6-1 in the sixth when Barnes scored on a bases-loaded walk to Justin Turner by Anthony Castro. They added a run in the seventh when Lux scored on a throwing error by Cleveland reliever by Nick Sandlin.

Guardians: With Cleveland having Monday off, there is a possibility Ramirez could also miss Sunday's game.

Dodgers: CF Mookie Betts (right rib soreness) was scratched form the lineup for the second straight day. ... P Dustin May, who underwent Tommy John surgery on his right elbow last May, threw 40 pitches during a bullpen session. Manager Dave Roberts said the next step in May's progression is for him to begin facing hitters every five days and build up his stamina from there.

Guardians: RHP Shane Bieber (3-3, 3.01 ERA), who grew up an hour away from Dodger Stadium in Laguna Hills, California, faces the Dodgers for the first time.

Dodgers: LHP Andrew Heaney (1-0, 0.00 ERA) will be activated off the injured list before the game and will make his first start since April 17. He has missed the past two months due to left shoulder discomfort.