Freshmen lead No. 8 Duke past Wake Forest without Coach K 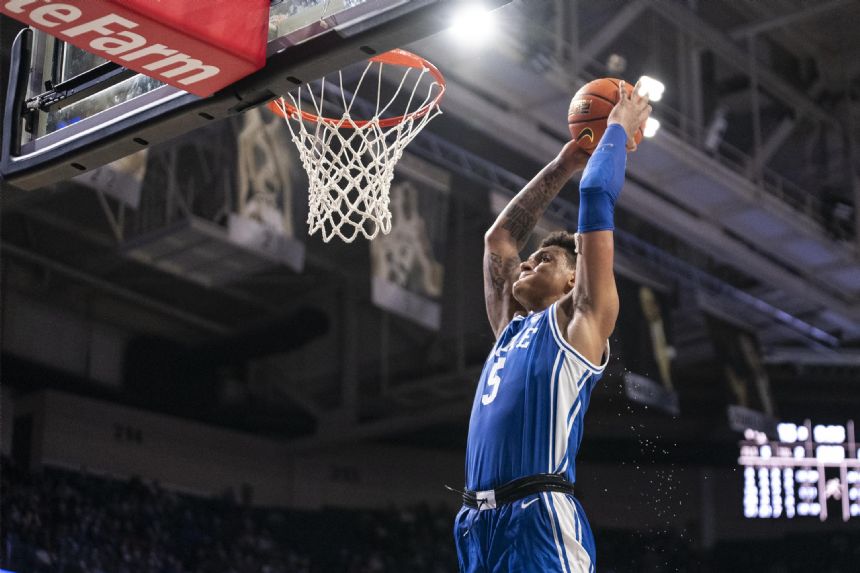 Fellow freshman A.J. Griffin had a season-high 22 points to help the Blue Devils bounce back from a weekend home loss to Miami. They did it with the retiring longtime Duke coach out with what the school called a "non-COVID-related virus," while associate head coach Jon Scheyer - designated as Krzyzewski's successor after this season - worked as acting coach.

Banchero and Griffin led the way as the Blue Devils (13-2, 3-1 Atlantic Coast Conference) suddenly stretched out a two-possession lead in the final minute of the first half - then carried a hot hand into the second that wobbled the Demon Deacons (13-4, 3-3) for good.

Duke made its last four shots of the first half, then roared out of the break by hitting its first nine.

The Spartans (14-2, 5-0 Big Ten) had the ball with 18.1 seconds left, and A.J. Hoggard drove into the lane in the final seconds and set up Hauser for the final basket.

The Golden Gophers (10-4, 1-4) were very competitive throughout the game and had opportunities to pull off the upset.

Minnesota's chances to win were hurt when Eric Curry injured his left ankle with a minute left, putting him on the bench with 19 points.

Eylijah Stephens scored 18 points for the Gophers and made four free throws late, tying it at 69.

GAINESVILLE, Fla. (AP) - Darius Days scored 20 points about 25 miles from his hometown and Eric Gaines added 15 in his second start of the season to lead LSU past Florida.

The Tigers (15-1, 3-1 Southeastern Conference) won their first game without starting point guard Xavier Pinson, who sat out with a sprained knee. Gaines helped pick up the slack, scoring eight points in the second half and going 4 of 5 on free throws down the stretch.

Florida's biggest issue was at the free throw line. The Gators missed 11 from the charity strip, including seven of nine down the stretch.

Moore, the reigning Big East player of the week, scored 10 points in the second half and finished with nine rebounds to help the Wildcats (12-4, 5-1 Big East) win their fifth straight. Eric Dixon added 15 points and 10 boards.

Scruggs hit two key 3-pointers, including one that tied the score at 56 with 2:16 left. But then Moore made a layup, Brandon Slater sank two free throws and Villanova was back in front by four with a minute to play. Moore sealed it by hitting two foul shots with six seconds left.