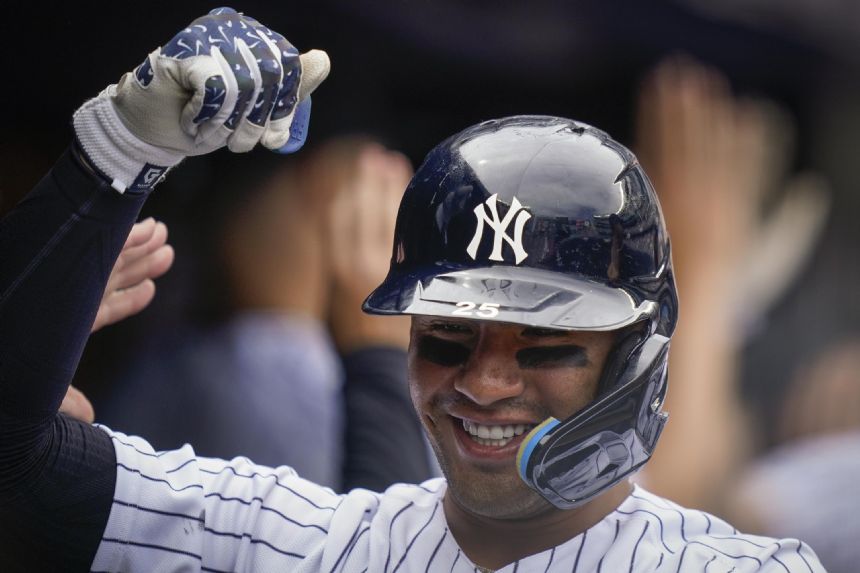 NEW YORK (AP) - Gleyber Torres drove in all New York's runs with a go-ahead, three-run homer off Jose Berrios in the fourth inning and a two-run single, leading the surging Yankees over the Toronto Blue Jays 5-3 Wednesday for their 15th win in 17 games.

An All-Star in his first two seasons who slumped in 2020 and '21, Torres restored a two-run lead with his sixth-inning single off Trevor Richards. Torres has four home runs in his last 11 games. Overall, he is batting .222 with five homers and 18 RBIs

New York won its seventh straight series and improved to a major league-best 22-8, its best 30-game start since 2003. The Yankees are 13-0 when scoring five runs or more.

Toronto has lost a season-high four straight and seven of nine. On a sloppy day for the Blue Jays, Bo Bichette failed to advance to third on an errant pitch following his fifth-inning double. Vladimir Guerrero Jr. then struck out, slammed his bat against the ground and snapped the lumber over his left knee.

After Yankees shortstop Isiah Kiner-Falefa bobbled Santiago Espinal's two-out grounder in the sixth for the first of his two errors, Alejandro Kirk tripped over second base and was tagged by Torres after initially beating the throw.

There didn't appear to be any carryover from the Yankees' 6-5 win the previous night, a game that turned testy and saw three Blue Jays ejected. Guerrero was hit by a pitch in the first inning, a plunking that didn't raise any issues.

Torres gave the Yankees a 3-1 lead after Anthony Rizzo and DJ LeMahieu singled in the fourth. Berrios left an 0-2 fastball over the plate that Torres drove 361 feet into the right field short porch.

Clay Holmes got Guerrero to ground into an inning-ending double play with two on in the seventh.

Espinal doubled leading off the ninth against Aroldis Chapman, No. 9 hitter Raimel Tapia walked and George Springer hit a sacrifice fly. Bichette hit a long drive just foul before striking out as he swung under a 100 mph pitch, and Guerrero popped out as Chapman remained perfect in eight save chances.

Toronto loaded the bases with no outs in the first when Springer walked, Bichette singled and Guerrero was hit by a sinker on the left elbow pad. Taillon gave up a run when Teoscar Hernandez grounded into a forceout, then struck out Lourdes Gurriel Jr. and retired Kirk on a foulout.

Hernandez reached on an infield single leading off the sixth - he originally was called out by first base umpire Shane Livensparger but the call was reversed on a video review - and scored on Matt Chapman's sacrifice fly off Michael King.

Yankees GM Brian Cashman said he will not discuss publicly whether any contract talks are going on with Aaron Judge. The outfielder is eligible for arbitration, with a hearing possible up until June 24, and can become a free agent after the World Series. Judge rejected an eight-year contract worth $230.5 million to $234.5 million, the difference to have been determined in arbitration for this year's salary, and said he didn't intend to negotiate again until after the season.

INF-OF Cavan Biggio, who hasn't played for the Blue Jays since April 24 following a positive COVID-19 test, was 2 for 2 with a two-run single and a double as a DH for Triple-A Buffalo against Lehigh Valley on Tuesday night. ... C Danny Jansen, out with a strained oblique since April 10, played five innings behind the plate and went 1 for 2 with a double for Class A Dunedin against Tampa.