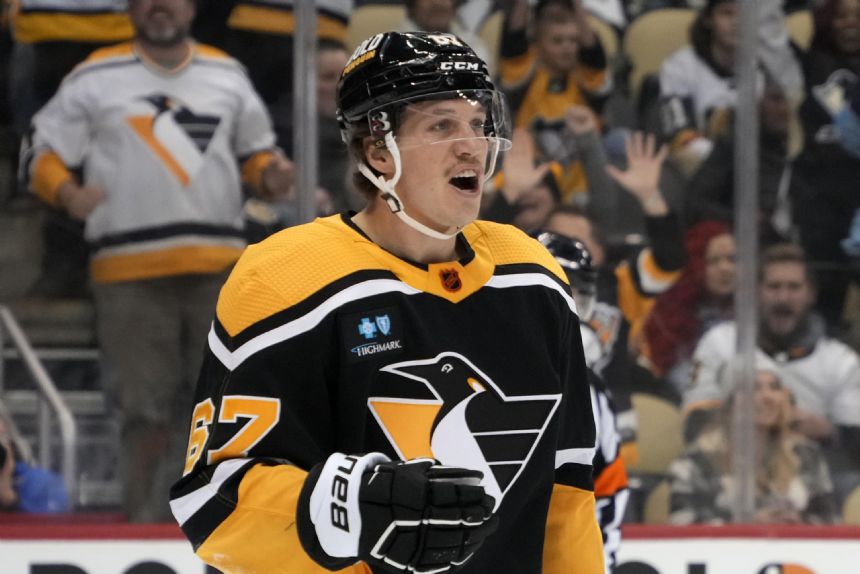 PITTSBURGH (AP) - Jake Guentzel and Kasperi Kapanen scored less than two minutes apart in the third period to rally the Pittsburgh Penguins to a 4-3 win over the Vegas Golden Knights on Thursday night.

Guentzel's power-play goal 7:33 into the third tied the game at 3, and Kapanen's first goal in nearly two months 112 seconds later put the Penguins in front for the first time. Tristan Jarry finished off a 34-save performance as the Penguins won for the first time since defenseman Kris Letang suffered a stroke on Monday.

Brock McGinn and Rikard Rakell also scored for Pittsburgh, which handed the Golden Knights just their second road loss in regulation this season.

Shea Theodore's long shot from the point that made its way through a sea of bodies in front 1:26 into the third broke a 2-2 tie, but the Penguins kept peppering Vegas goaltender Logan Thompson until the rookie finally gave way.

Thompson, the NHL's Rookie of the Month in November, stopped 43 shots while losing for just the third time in his last 13 starts. Jack Eichel scored his 12th goal of the season for Vegas. Reilly Smith added his 10th.

The Golden Knights have used Thompson's precocious play, a resurgent Eichel and the NHL's best road record to the top of the Pacific Division and counterpunched effectively early despite being outplayed for lengthy stretches.

Vegas wasted little time sprinting to the lead, taking a 2-0 advantage in the first period despite being outplayed for lengthy stretches. The Golden Knights counterpunched effectively, with Eichel pounding home a goal from in front 3:59 into the game. Smith then ended Pittsburgh's streak of 19 consecutive penalty kills with a snipe from in close 17:59 into the first.

Pittsburgh's sustained energy translated into production in the second. McGinn's shot from just above the goal line deflected off Vegas defenseman Ben Hutton and into the net 1:56 into the period. Rakell tied it at the end of a lightning-quick sequence in which Sidney Crosby created a turnover deep in the Vegas end and fed the puck to Guentzel. Guentzel slipped it to Rakell in front for essentially a tap-in 13:07 into the period to tie it heading into the third.