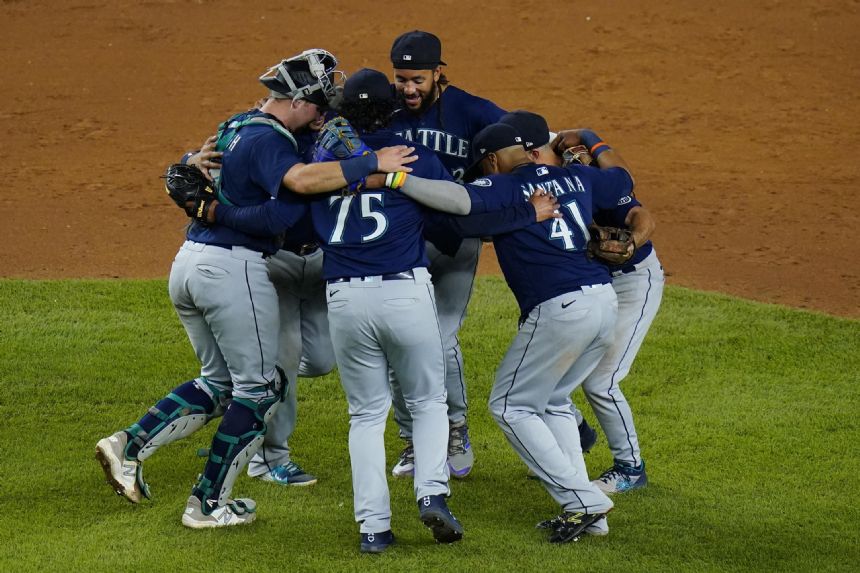 Pinch-hitter Sam Haggerty opened the seventh inning with a go-ahead homer, Andres Munoz escaped a bases-loaded jam in the ninth and the Seattle Mariners hung on for a 8-6 victory over the New York Yankees on Tuesday night after blowing a four-run lead.

The switch-hitting Haggerty batted for left-handed hitting Jarred Kelenic against left-hander Lucas Luetge (3-4) and broke a 6-6 tie by lifting a 1-0 cutter into the left-field seats.

Haggerty homered two days after getting stiches above an eye, an injury sustained when he was hit by his helmet, thrown after he failed on a bunt.

Munoz, throwing at up to 102.6 mph, loaded the bases with two outs after DJ LeMahieu singled, and Aaron Judge and Anthony Rizzo walked. Munoz, struck out pinch-hitter Gleyber Torres on a slider for his second save.

Seattle is 5-8 since entering the All-Star break with 14 straight wins.

Suarez hit a two-run drive three batters in, and Raleigh reached Monument Park in the second.

Carlos Santana drove in three runs, a night after getting his 1,500th hit. He hit a sacrifice fly to give Seattle a 4-0 lead in the third and added two-run double in the fifth.

Adam Frazier hit an RBI single in the ninth off Albert Abreu. Lou Trivino then made his Yankees debut, pitching to catcher Jose Trevino.

Scott Effross, another reliever obtained by New York this week, entered in the seventh in his Yankees debut.

Donaldson, who entered with three hits in his previous 32 at-bats, hit an RBI double to start a three-run fourth. Trevino hit a two-run homer and raised his season total to 10 - one more than his career total entering the season.

Rizzo started the sixth by homering in a fourth straight game. After a single by Matt Carpenter, Donaldson tied it by hitting a first-pitch fastball into the New York bullpen.

Penn Murfee (2-0) allowed a double to Trevino and an infield single to Isiah Kiner-Falefa before getting Aaron Hicks on a double play to the end the sixth.

Mariners: 1B Ty France took swings off a tee in the batting cage and missed a third straight game with a sore left wrist.

Yankees: RHP Luis Severino (right lat) played catch from 90 feet and said he was surprised to be transferred to the 60-day IL on Monday. "I was not happy. I was not expecting that," Severino said. "If that's the plan they have for me to come back healthy, I have to just follow the plan."... RHP Frankie Montas will be activated during this weekend's three-game series in St. Louis. ... The Yankees optioned RHP Carlos Espinal to Triple-A Scranton/Wilkes Barre and recalled OF Tim Locastro from Triple-A. ... C Ben Rortvedt, who injured his oblique in spring training, was activated from the 60-day IL and optioned to Triple-A.

RHP Luis Castillo (4-4, 2.86 ERA) makes his debut for the Mariners on Wednesday against New York ace Gerrit Cole (9-3, 3.30). Castillo is pitching in the Bronx for the second time in nearly three weeks. He took a no-hit bid into the sixth inning of his start for the Reds on July 14.