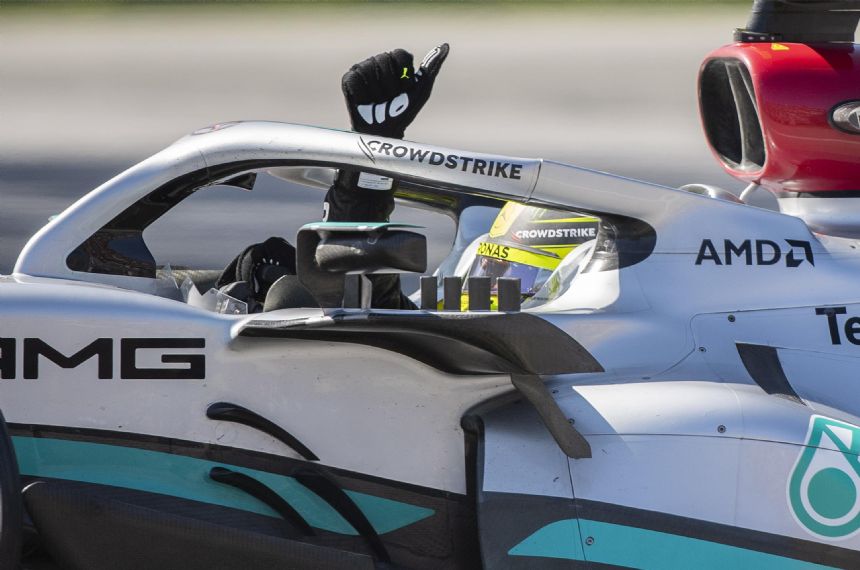 It was the roar of the fans that Lewis Hamilton missed, and so it was fitting that when he most needed a boost, he heard it from the largest crowd in Canadian Grand Prix history.

Montreal is, after all, the site of Hamilton's first Formula One podium. That was 15 years, 103 wins and seven world championships ago - practically another lifetime considering the horrific start Hamilton and Mercedes have had this season.

The new Mercedes built to F1's 2022 specifications is miserable to drive; Hamilton's back hurts from all the bouncing, in part because Mercedes rides it low to the ground for maximum performance. That quest for downforce has created a "porpoising" effect that is, at minimum, dangerous to a drivers' long-term health.

Hamilton acknowledged suffering from more headaches than usual the last few months, but if they are micro-concussions, he doesn't know. He uses his own personal physiotherapist, takes painkillers and, along with new teammate George Russell, drives whatever car Mercedes gives them.

But it had to feel like rock bottom a week ago in Baku, when the 37-year-old struggled to even climb from his car after bouncing for 190 miles through the Azerbaijani streets. F1's governing body stepped in last Thursday with an FIA-issued technical directive to address porpoising.

The directive engulfed the Circuit Gilles Villeneuve paddock in backroom politicking, and rivals found it peculiar that Mercedes so quickly reacted to a late notification in time for Friday's opening practice.

In the end, Mercedes used the technical directive to try new setups Friday, but it made its cars even worse. So come Saturday, the team did what their rivals had been grumbling all along: Mercedes raised the ride height and Hamilton's fourth-place qualifying effort was his best of the year. Then he finished third Sunday to earn just his second podium in nine races this season.

He was Sir Lewis Hamilton when he climbed from the car, not the veteran struggling to hold off his younger teammate and keep the leaders in sight. Hamilton heard the crowd - F1 said a record 338,000 spectators turned out over three days in the series' return after a two-year pandemic pause - and immediately addressed the fans.

"How are you going, Montreal?" he asked. He later reflected on what Sunday's finish - his first podium since the season-opener in March - meant to him in this terrible season.

"I've not been on the podium for a long time," he said. "So, especially as I had my first one here 15 years ago, to be back up there and get to experience the energy from the crowd was very reminiscent of that first year here. I'm so, so happy with it."

Will Hamilton now be competitive enough to defend his British Grand Prix victory when F1 next races in two weeks? Probably not. Mercedes still doesn't have the pace of Red Bull and Ferrari, and even after raising the ride height in Montreal, the cars still bounced.

"We still have bouncing, that's not going away," Hamilton said. "And I really hope, moving to Silverstone, it's such an important race for us and for me, I just want to be in a battle with these guys. We will get there eventually."

Russell, who has beaten Hamilton in seven of nine races this season, didn't sound as encouraged after finishing fourth. He said the porpoising was likely "less extreme" than Baku because of Montreal's smoother surface but the Mercedes "is still smashing up and down on the ground."

"The overall inherent issues of these 2022 cars are far from being resolved," Russell said.

He also was critical of Mercedes' pace and said the qualifying and race results were misleading because the pace deficit to Red Bull and Ferrari "was still pretty substantial."

"We're still a long way from where we need to be," said Russell, "yeah, we haven't made a huge amount of progress as yet."

Their rivals will tell you Mercedes simply wildly missed the mark on its 2022 car build and is overdramatizing driver health concerns to push the FIA into rules changes.

Although other drivers, including Sergio Perez of Red Bull, have acknowledged the porpoising, no team has struggled as Mercedes. And, if Mercedes is so concerned, rival teams openly pondered, why doesn't it raise its ride height to better comfort its drivers? (Answer: The lower to the ground, the faster the car).

"This is a Formula One car. This is not a Rolls-Royce. And drivers should be aware of this," said Franz Tost, the former driver-turned-head of AlphaTauri. "If the cars are too stiff, or it's too difficult for them, maybe they should stay at home, in the living room, sit in the chair, and then they can do the races on TV or wherever. I don't know."

Alpine principal Otmar Szafnauer was just as blunt: "We just tend to run the car at a ride height that still gets the performance that we need, but it doesn't injure or hurt the drivers or destroy the car.

"We run it safely. And I believe every team has that opportunity to do so," he added.