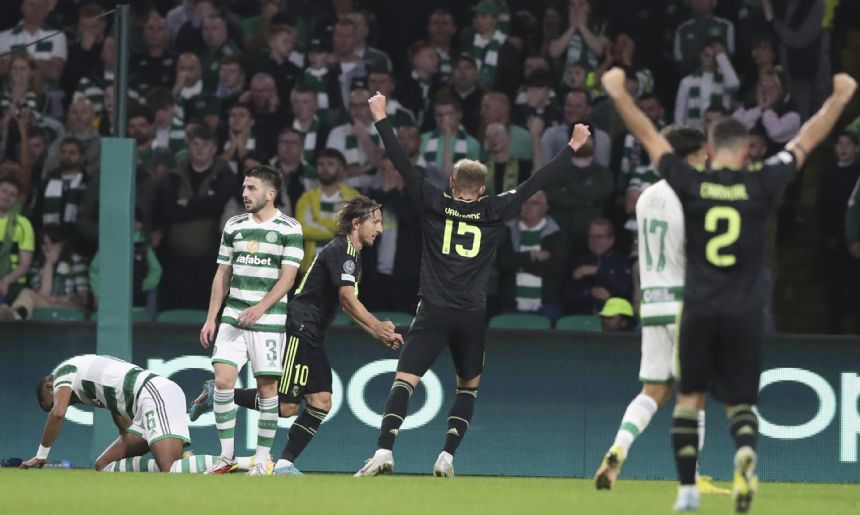 Hazard scored a goal and set up two others after replacing Benzema as Madrid began defense of its Champions League title with a comfortable 3-0 win at Celtic on Tuesday.

Benzema, the competition's top scorer last season with 15 goals, had to be substituted in the 30th minute with an apparent knee injury. The France striker started limping and put his hand on his right knee before asking to be replaced and slowly walking off the field.

Hazard came in and was involved in the first two Madrid goals. He helped set up Federico Valverde for a cross that found Vinicius free inside the area in the 56th, then four minutes later he assisted Modric for his goal from close range.

Hazard found the net himself from inside the area in the 77th for his first goal with Madrid since January.

The 34-year-old Benzema is coming off his best season ever, when he was the leading scorer both in the Champions League and the Spanish league, which Madrid also won.

Madrid defeated Liverpool in last season's Champions League final after an incredible run in which it had to rally against Paris Saint-Germain, Manchester City and Chelsea with decisive goals by Benzema.

It was an open match early on in Glasgow, with both teams creating scoring opportunities but missing the target. Celtic had a few good occasions in the first half, including a one-on-one situation squandered by Liel Abada and a shot on the post by Callum McGregor.

It was Madrid's first Champions League game since defensive midfielder Casemiro joined Manchester United, breaking up a midfield that was touted as one of the best in the world with the Brazilian playing alongside Toni Kroos and Modric, who made his 100th Champions League appearance with the club.

Coach Carlo Ancelotti played with Aurelien Tchouameni in Casemiro's position on Tuesday, with Valverde playing more up front along with Vinicius and Benzema.

Celtic has won only once in its last 10 group stage matches since defeating Barcelona in 2012, with eight losses and a draw. Celtic has lost its last six group-stage games at home in the Champions League. It is winless in its last 11 group-stage openers in the European competition, with nine losses and two draws.

Shakhtar Donetsk won at Leipzig in the other Group F game on Tuesday.