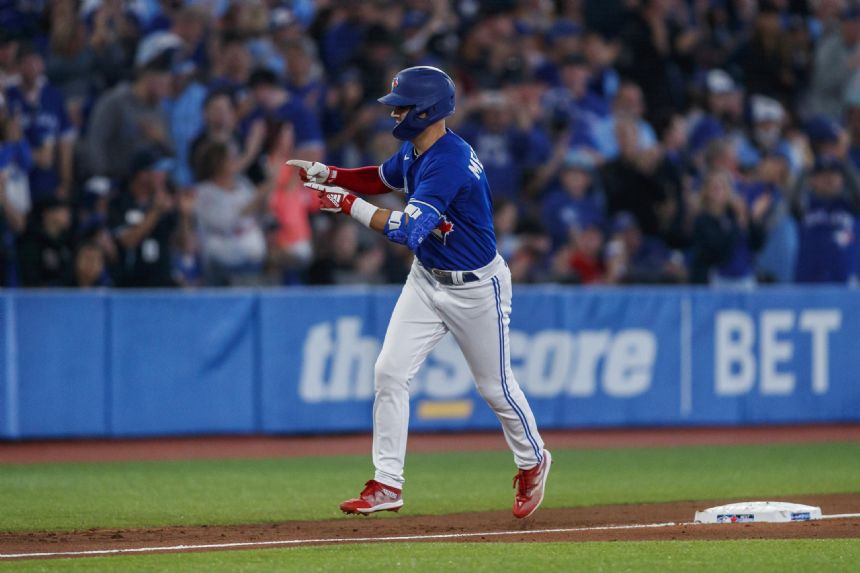 The Blue Jays completed a three-game sweep with their 16th win in 19 games against Boston this season. That's the most victories by any major league team against a division opponent this season.

Sixteen wins is also the most victories the Blue Jays have had against an opponent in a single season. Toronto went 15-4 against Baltimore in 2002 and again in 2010.

Blue Jays right-hander Kevin Gausman left after three innings because of a cut on his right middle finger. Gausman allowed two runs and four hits, struck out four and walked none.

Merrifield went 3 for 3 with two RBIs and scored twice. He's 10 for 19 over his past six games. Needing a triple to complete the cycle, Merrifield grounded into a fielder's choice to end the eighth inning.

Bobby Dalbec hit a solo home run and had three RBIs for the Red Sox, who lost their final nine meetings with Toronto. Boston didn't beat the Blue Jays again after a 6-5 win in Toronto on June 29.

Yimi Garcia pitched the eighth inning and Jordan Romano finished for his 36th save in 42 chances.

Hernandez homered to begin the second, then hit a two-run drive off the left field foul screen in the fourth, his 14th career multi-homer game. The home runs were his 24th and 25th.

Merrifield hit a leadoff blast in the third, his 11th.

All three homers came off Boston right-hander Michael Wacha (11-2), who gave up three home runs for the second straight start. Wacha allowed five runs and six hits in four innings, losing for the first time since May 31 against Cincinnati.

The Red Sox are 23-50 against AL East opponents with three games against Tampa Bay remaining.

After Dalbec's homer cut it to 5-3, George Springer restored Toronto's three-run lead with an RBI fielder's choice against right-hander Kaleb Ort in the bottom of the seventh.

Pop made a behind-the-back stab on Abraham Almonte's comebacker in the fourth, then knocked down Enrique Hernandez's 106.4 mph liner and got the out at first to end the fifth.

Red Sox: 1B Eric Hosmer (back) is expected to be activated off the injured list Monday, manager Alex Cora said.