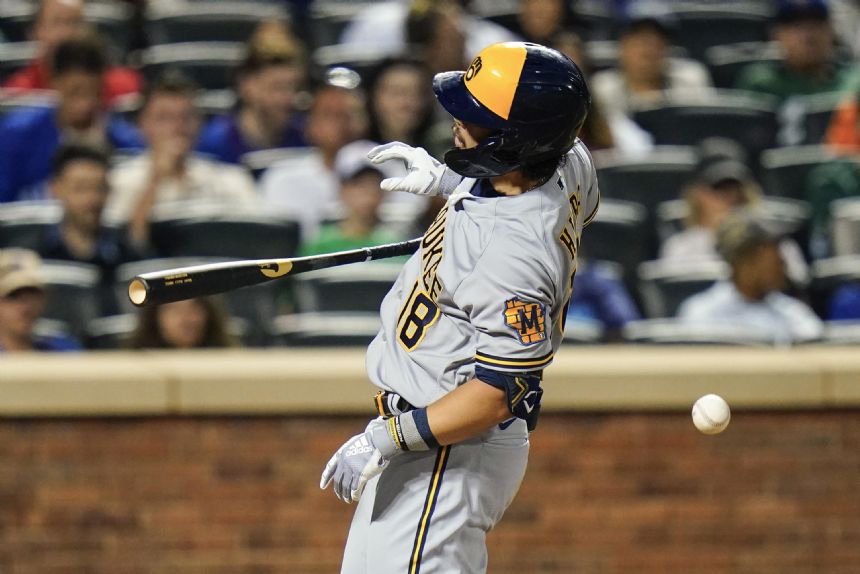 CINCINNATI (AP) - Keston Hiura hit a tiebreaking home run off Ross Detwiler in the seventh inning, and the Milwaukee Brewers beat the Cincinnati Reds 5-4 in a battle of long balls on Friday night for their third win 13 games.

Hunter Renfroe's three-run homer in the fourth and Willy Adames' solo shot in the fifth built a 4-0 lead against Hunter Greene on a night every run scored on a homer.

Albert Alomar Jr. hit a two-run homer in the fifth, and Brandon Drury and Tommy Pham followed with solo drives in the sixth on Eric Lauer's first two pitches of the inning to tie the score 4-4.

Detwiler (0-1) entered with one out in the seventh and Hiura, the No. 9 batter, hit a first-pitch fastball the opposite way to right-center.

Lauer (6-2), who had been 0-3 with a 6.60 ERA since winning at St. Louis in May 26, givie up four rns and six hits in 6 1/3 innings. Miguel Sanchez got the last two outs of the seventh, Devin Williams pitched a one-hit eighth and Brad Boxberger stranded two runners for his first save since last Aug. 2.

Kyle Farmer singled leading off, Nick Senzel walked with one out and pinch-hitter Joey Votto flied to Tyrone Taylor on the center field warning track.

Greene, who allowed five home runs to the Brewers on May 2, allowed four runs four hits and two walks in five innings, raising his ERA to 5.26.

Milwaukee catcher Pedro Severino, serving an 80-game suspension following a positive test for the performance-enhancing substance Clomiphene, was sent to Double-A Biloxi on a rehabilitation assignment. Barring any Brewers' rainouts, Severino would be eligible to return to the Brewers on July 3 at Pittsburgh. The Brewers also assigned OF Corey Ray outrigh to Triple-A Nashville and sent RHP Jandel Gustave (hamstring) to Nashville on rehab assignment.

Reds: Votto was scratched from manager David Bell's original starting lineup, getting a day off. ... RHP Tony Santilla (lower back) was placed on the 15-day IL, retroactive to Tuesday. ... IF/OF Max Schrock (left calf strain) was activated from the 60-day IL. ... RHP Lucas Sims (bulging disk) was transferred to the 60-day IL. ... LHP Nick Lodolo (lower right back strain) is scheduled to make a rehab start for Triple-A Louisville at Durham on Saturday.