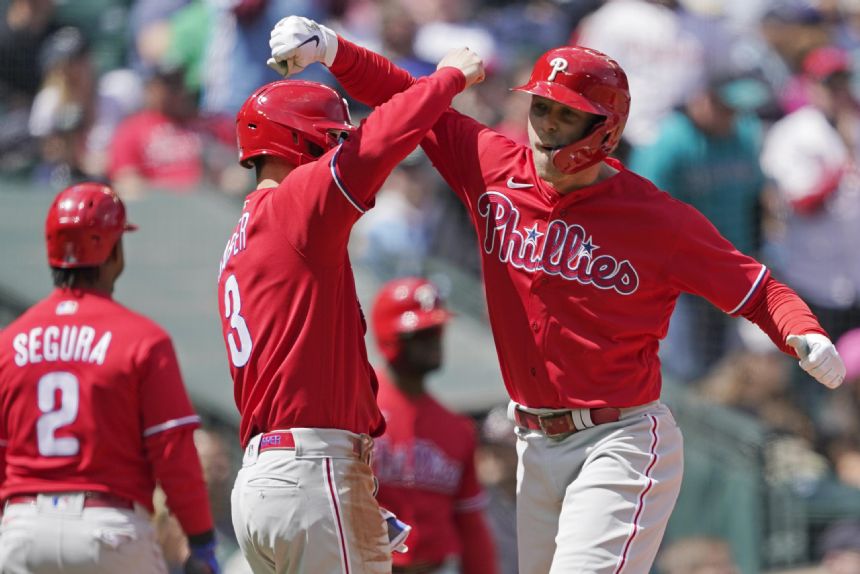 SEATTLE (AP) - Rhys Hoskins homered for the third straight game and provided all of Philadelphia's offense with the second grand slam of his career, and the Phillies beat the Seattle Mariners 4-2 on Wednesday.

The Phillies took two of three from the Mariners helped by the homer barrage by Hoskins. He had solo homers in each of the first two games and provided the big blow with his first grand slam since March 28, 2019, against Atlanta.

Hoskins lined a 2-1 pitch from Seattle starter Logan Gilbert (4-1) just inside the foul pole down the left field line with one out in the fourth inning. Gilbert, who started the day second in the AL in ERA at 1.36, retired nine of the first 10 batters including five strikeouts to start the game.

But Gilbert ran into trouble in the fourth with a single by Alec Bohn and walks to Bryce Harper and Jean Segura setting up Hoskins for his fifth homer of the season. Hoskins' previous seven homers dating back to last season had all been solo shots.

Gilbert had allowed five earned runs in his first 36 innings to start this season, but gave up four on one swing. He lasted five innings and finished with nine strikeouts.

Phillies starter Bailey Falter was one out away from earning his first victory of the season before being pulled with two outs in the fifth inning at his target of 65 pitches.

Making his first start of the season and just the second of his career, Falter scattered five hits and allowed one run, and importantly didn't walk a batter. He struck out four.

Adam Frazier doubled twice off Falter and scored after the first one on Julio Rodriguez's RBI single. But that was the extent of the damage against the right-hander.

Ty France had a two-out RBI single in the seventh inning but Seattle scored three runs or less for the 11th time in the past 15 games.

Philadelphia recalled Falter from Triple-A Lehigh Valley to make the start. OF Matt Vierling was optioned to Lehigh Valley.

Seattle acquired minor league pitcher Prelander Berroa from San Francisco for infielder Donovan Walton. Berroa was pitching for Single-A Eugene in the Northwest League. Walton appeared in one game this season for Seattle this season. He appeared in 24 games batting .206 with two home runs and seven RBIs in 2021.

Mariners: Seattle manager Scott Servais said RHP Sergio Romo and C Tom Murphy are expected to go on the road trip although it unclear when either may be activated. Romo has been on the injured list since April 13 with right shoulder inflammation. Murphy suffered a dislocated left shoulder trying to make a tag last week. Servais said Murphy is doing some strengthen exercises to try and stabilize the shoulder. He's eligible to come off the injured list next Tuesday.

Phillies: RHP Zack Wheeler (1-3, 4.10) is expected to be activated off the COVID-19 IL and start the opener in Los Angeles against the Dodgers.

Mariners: After an off day, Seattle opens a three-game series in New York against the Mets on Friday. LHP Marco Gonzales (1-4, 3.91) will start the opener.