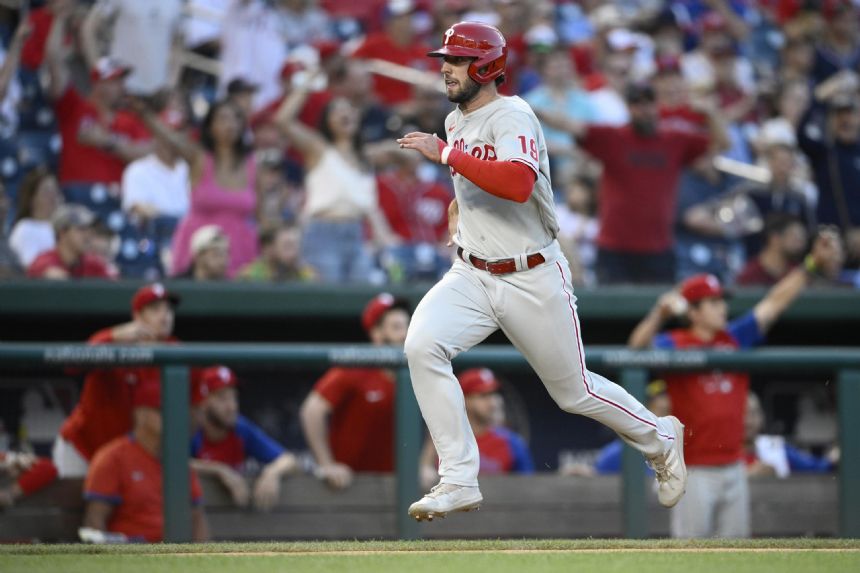 WASHINGTON (AP) - Pinch-hitter Rhys Hoskins singled home the go-ahead run in the 10th inning and the Philadelphia Phillies beat the Washington Nationals 2-1 Saturday for their 15th win in 17 games.

The Phillies are a season-high five games over .500 and 14-2 since firing former manager Joe Girardi on June 3.

The last-place Nationals lost on the day they retired the No. 11 of organizational stalwart Ryan Zimmerman in front of a sellout crowd of 42,730.

In the Washington ninth, pinch-hitter Lane Thomas had a two-out single on a 2-2 slider from Brad Hand (2-1) that scored Juan Soto with the tying.

Hoskins' hit up the middle off Reed Garrett (0-1) scored automatic runner Matt Vierling from second. Philadelphia then loaded the bases with no outs, but did not score again.

Seranthony Dominguez recorded his first save of the year by pitching a scoreless 10th.

Yairo Munoz homered in the Phillies seventh off Erasmo Ramirez.

Gray struck out four, walked three and threw a career-high 117 pitches. He retired Bryson Stott on a comebacker with two runners on base to finish his outing and exalted on his way back to the dugout. Stott slammed his bat after the grounder.

Washington put two runners on base in the sixth before Nelson Cruz struck out. Nola's efficiency - 71 pitches in six innings - allowed him to remain in the game.

Philadelphia traded RHP James Norwood to the Boston Red Sox for cash considerations. Norwood, 28, started five games and appeared in 20 total this season for Philadelphia. He had an 8.31 ERA.

Phillies: OF Bryce Harper (blister) was scratched from the starting lineup. Philadelphia manager Rob Thomson said Harper's blister is near the base of his left index finger and "blew up" on him overnight.