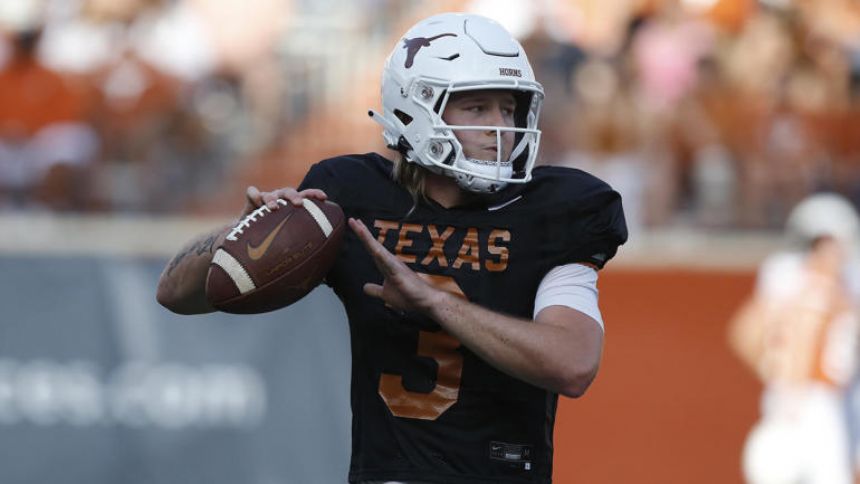 If'Texas quarterback Quinn Ewers'is as he was advertised to be coming out of high school, he will likely be the starter when the Longhorns hit the field this fall. The question is whether that will be his only shot to start. Ewers, the No. 1 overall prospect in the Class of 2021, will have company in Austin in 2023 in the form of Arch Manning, the No. 1 overall prospect in the current recruiting cycle. Manning on Thursday and, should his commitment hold, he represents a clear sign that second-year coach Steve Sarkisian on a silver platter.'

What does that mean for Ewers?'

The 6-foot-3, 206-pounder from Southlake, Texas, transferred to the Longhorns from Ohio State after just one season in Columbus. He only took two snaps with the Buckeyes, never threw a pass and the likelihood of him taking the spot from Heisman Trophy finalist C.J. Stroud this year was equal to that of a winter storm passing through Austin in July.'

The easy answer is that Ewers will transfer again. That isn't too outlandish considering he did it once. However, he won't be able to receive immediate eligibility without a waiver unless he graduates since he already transferred once as an undergrad. It doesn't seem like Ewers is interested in that as of now. In fact, Manning was "attached at'the hip" with Ewers during Manning's official visit earlier this month, according to 247Sports.'

That's not terribly surprising. Top-tier high school quarterbacks are typically dripping with confidence after all of the attention they receive prior to college. Ewers will likely relish the competition from Manning once the nephew of Eli and Peyton Manning arrives on campus.

That could change if he buckles under the Texas heat, though.'

The Texas program has been riddled with bad luck, recruiting misses and poor performances for more than a decade. If Ewers adds to that depressing streak, the fanbase and decision-makers inside the program could turn on him in a hurry.

One thing is certain, though. Sarkisian has made his program a destination for top-tier talent -- especially at the quarterback position. Ewers and Manning both have 1.0000 rankings in the 247Sports Composite, the highest possible score in the index that combines rankings from multiple recruiting websites. There will be a home for Ewers, whether it's in Austin or somewhere else.'

Sarkisian doesn't have to worry about that for another year, though. Championship coaches build a culture of competition that permeates through a locker room and sets the foundation for championship programs. It's the main reason Nick Saban has been so successful at Alabama and Kirby Smart won the national title last year at Georgia.

Ewers won't have to wait for Manning to arrive on campus to feel that pressure, though. Ewers has to beat out'Hudson Card'for the top spot on the depth chart in 2022. If that happens, don't expect Ewers to back down just because Manning is on his way. A true competitor will welcome that chance with open arms, and there's nothing to suggest that Ewers lacks that kind of confidence.

Still. the most sought-after prospect in the game will be playing for Isidore Newman High School in New Orleans in 2022, but he might as well be playing in Ewers' rearview mirror. Everything that Ewers does -- from his accuracy, arm strength, attitude and more -- will be inspected as if he is playing under a giant microscope. That will tell the tale of his future. If he can handle it, the 2023 quarterback battle in Austin will be as fierce as any that we've seen in the sport's modern era.'