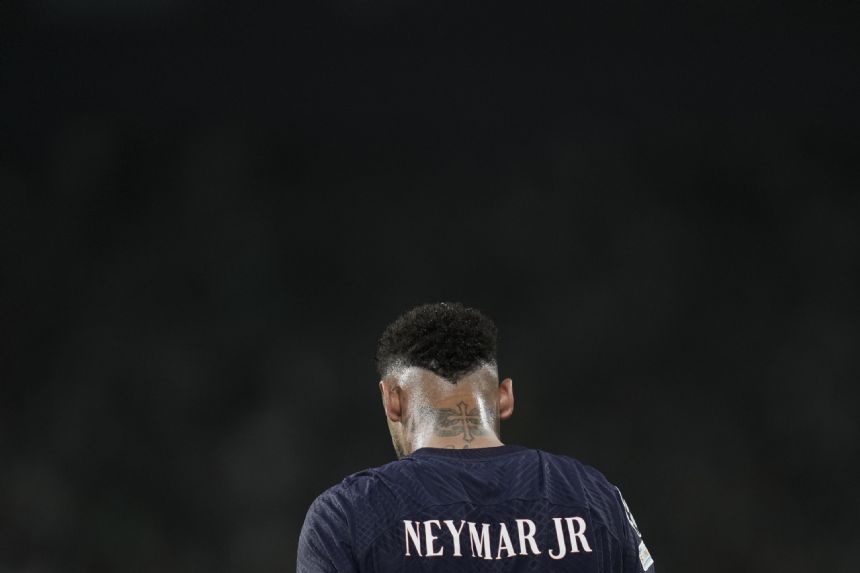 Here's some great news for Brazil: Neymar is winning everyone over this season with his goals and attitude for Paris Saint-Germain.

He's also been injury-free after years of being plagued by ankle, hamstring and foot injuries.

Even though Neymar suffered a small cut in his right knee and needed minor treatment during Wednesday's training session, Brazil coach Tite said he was expected to start against Ghana on Friday in a potentially dazzling attack with Raphinha, Vinicius Junior and Richarlison.

Fans were high-fiving Neymar and having their photos taken with him when he arrived at Wednesday lunchtime in Le Havre for the game against Ghana, the penultimate friendly for both sides before the World Cup in Qatar.

Neymar's work-rate for PSG has been exemplary. He's fitter than for many years and scoring prolifically, with 11 in 11 games overall.

The 30-year-old forward has been creating, too.

His pass for Lionel Messi in Sunday's 1-0 win at Lyon was his seventh in the French league - level with Messi.

Will this form continue all the way to the World Cup in Qatar, where Brazil aims for a record-extending sixth title but a first for 20 years?

Even more so if Neymar enters the tournament in Qatar with the additional psychological boost of being Brazil's all-time leading scorer.

He's on 74, behind only three-time World Cup winner Pele's record of 77.

He has another chance of overtaking Pele in a friendly against Tunisia next Tuesday at Parc des Princes, also the home of PSG. The last time Brazil played at the stadium was in 1992, when Neymar was six months old.

Neymar is a more mature player than at the last World Cup in 2018, where he drew attention with his histrionics and for constantly rolling around on the ground every time he was fouled, even lightly.

Brazil's World Cup opponents in Group G are Serbia, Switzerland and Cameroon. Neymar will be confident of bolstering his goal tally in those three games as he bids to write his name alongside Pele's as a World Cup winner.

Ghana, meanwhile, has a final warmup against Nicaragua in Spain on Tuesday.

Ghana has plenty of goal-scorers to fear at the World Cup in Group H.

So at least facing Neymar will keep Ghana's defense sharp and prepare them better for what lies ahead.

Ghana's all-time leading scorer is Asamoah Gyan with 51, but he's left a void in attack since he retired from international soccer three years ago.

Andre Ayew seeks his 24th international goal and younger brother Jordan Ayew, who has been short on club form this season for English Premier League side Crystal Palace, looks for his 20th.

Athletic Bilbao's Inaki Williams is after his first for Ghana.