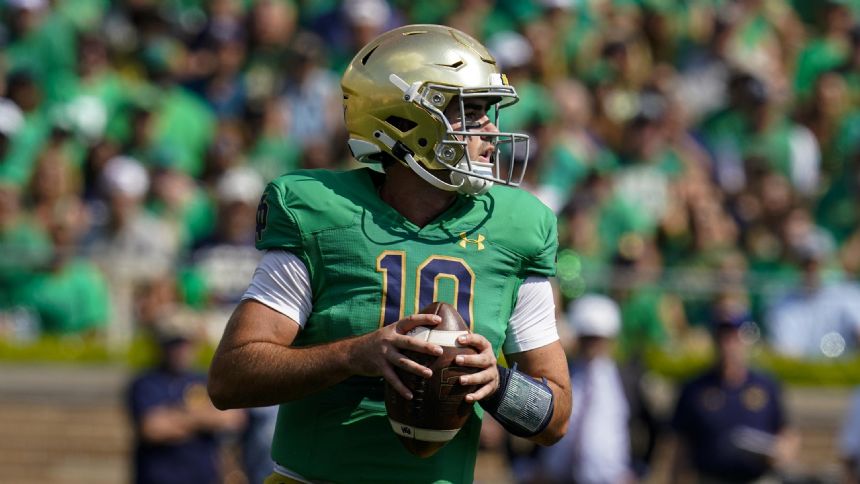 Now, quarterback Drew Pyne needs to help the Fighting Irish perform at a high level on Saturday when they visit North Carolina (3-0) and a defense that's ranked among the nation's worst.

"We definitely executed together a lot more often, but we're still not quite where we want to be yet," Notre Dame center Zeke Correll said, critiquing last weekend's 24-17 victory over California. "We're still focused on building off of each performance and improving."

The win finally provided some glimmers of hope after the struggles that led to back-to-back losses to start the season and were compounded when starting quarterback Tyler Buchner suffered a season-ending shoulder injury.

But the Irish (1-2) still find themselves in potentially troubled waters. A loss Saturday would give Notre Dame its first 1-3 start since a 4-8 finish in 2016. A win would put the Irish back at .500 and give them another confidence boost before playing three ranked teams - No. 19 BYU, No. 5 Clemson and No. 7 Southern California - later in the season.

The most glaring problem has been the struggling offense, which ranks No. 114 in total yards (300.3 per game) and No. 115 in scoring (18.3 points). North Carolina, meanwhile, has been outscoring opponents from the Group of Five or the Football Championship Subdivision while their defense has struggled mightily. It ranks No. 123 in total yards allowed (486.3) and 119th in scoring defense (37.7).

For Notre Dame, which rushed for a season-best 147 yards against Cal, squaring off against a run defense that allows 193 yards per game offers a chance to control the clock and limit possessions. The Tar Heels allowed Appalachian State to score 40 points - in the fourth quarter - in a two-point victory (63-61).

"I think the communication has gotten better," Chizik said. "I think to get a breather and go back and look at when you were playing poorly and why, and you put it all together and not just look at a single event or a single game, I think it's pretty glaring. I feel really good in terms of the players seeing what we need to do a better job of collectively."

Pyne looked like a first-time starter early against Cal. Then he cast aside those early-game miscues to complete 13 of his final 14 passes for 123 yards and two TDs, giving Freeman and the Irish hope that he can pick up where he left off.

"He's a passionate dude," Freeman said. "Sometimes that can almost be your biggest challenge as you look at the start of the game."

Offensively, North Carolina has been virtually unstoppable. Second-year quarterback Drake Maye has thrown 11 touchdown passes and rushed for 146 yards and another score, helping the Tar Heels average 51.3 points so far.

Freeman knows the Irish defense must find a way to replicate the way it played the first three quarters at Ohio State in the season opener, when Notre Dame led at halftime.