Is Braves star Ronald Acuna Jr., a year after ACL injury, fully back? 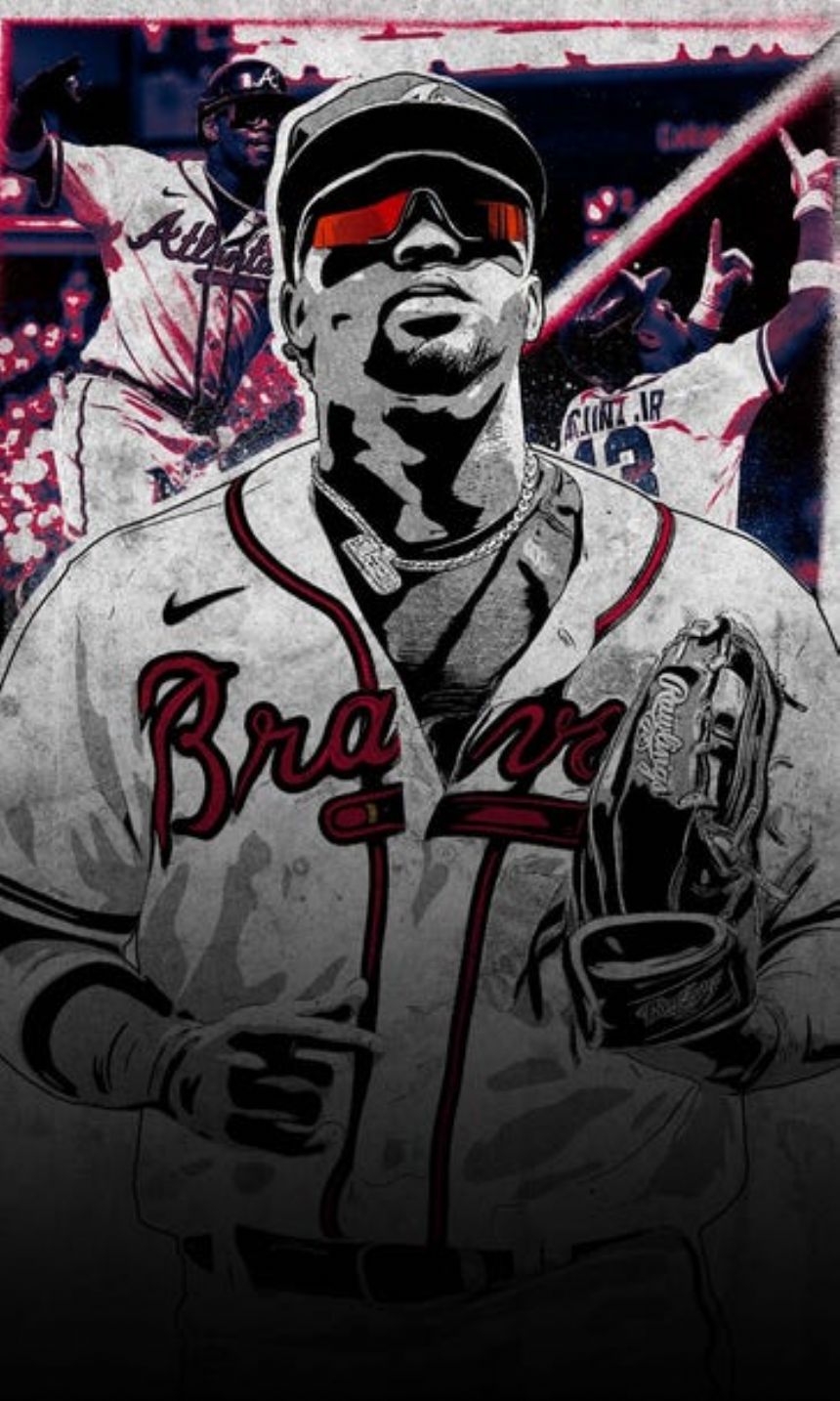 Before his ACL gave out on July 10, 2021, Ronald Acuna Jr. was on pace for one of the best offensive campaigns of the 21st century. Through 82 games, Atlanta's superstar outfielder was hitting .283/.394/.596 with 24 homers and 17 steals. Only three other players have ever put together comparable power, steal and on-base numbers through the first-half of a season: Eric Davis in 1987, Larry Walker in '97 and Christian Yelich in 2019.

Had Acuna not landed limply on that fateful day at Marlins Park and continued his torrid pace over the season's latter half, he would have been the runaway favorite for NL MVP. Alas, we live in the worst timeline, and Ronald did indeed miss the remainder of last season recovering from leg surgery. Atlanta won the World Series anyway, with Acuna cheering on his teammates from the sidelines.

After taking the first month of 2022 to fully heal, he returned to action for the Braves in early May. To not overtax Acuna's reconstructed ligament, the team opted to have him DH a few days a week in the early going. But since June 2, the face of Atlanta's franchise has played every single game in right field, a signal from the team that he is, for all intents and purposes, fully back.

Ben Verlander analyzes the impact that Ronald Acuna Jr. had on Atlanta's hot streak earlier this month and how he continues to bring new viewers to MLB.'

Unfortunately though, injuries can linger, even once players have returned to the field. Former Cleveland outfielder Grady Sizemore looked like a future Hall of Famer before knee surgeries limited his explosiveness. The same thing happened to the aforementioned Eric Davis. Even Alex Bregman, who a few years ago was a perennial MVP candidate, hasn't looked like the same player since a quadriceps strain started bugging him last season (his sprint speed dropped from the 63rd percentile in 2019 to the 29th in 2022).

So with Acuna now almost a year removed from his initial injury, let's dive into some video and data to see if there are any noticeable lasting impacts hampering him on the diamond.

Let's start with the base level offensive numbers. Through his first 40 games in 2022 (through June 21), Ronald was slashing .282/.375/.468, an outstanding batting line, but noticeably below his historically amazing .283/.394/.596 mark from last season. While there are certainly some injury-related factors at play that have dampened his stats, a look into his game logs and batted ball data reveals that small sample size and a more passive approach are the main culprits.

On Tuesday, Acuna smacked his seventh homer of the year, a go-ahead, two-run mega-blast off San Francisco's Zack Littell. But before that big fly, Acuna had gone more than a week without a single extra-base hit, a cold stretch that reduced his OPS from .943 to .812. Batted ball data from that "slump" suggests it was nothing more than a run of bad luck. He still hit nine balls over 95 miles per hour during that span (the Statcast threshold for a "hard hit ball"), six of which unluckily turned into outs. In that Tuesday game against the Giants, he ripped three balls harder than 105 miles per hour, including the homer.'

He also took about a week to get rolling when he first came back, going five for his first 25, an understandably slow start considering he hadn't seen major-league pitching in almost a year.

A look at his maximum exit velocity this year (116.6) assuages any real concern. That mark is only a smidge below his max from last season (117.9) and still ranks in the 98th percentile league-wide, a sign that his high-end rotational power and lower-half explosiveness are more or less back to pre-injury levels.

The biggest drop-off in Acuna's offensive game compared to 2021 is his walk rate. From the beginning of the COVID-shortened 2020 season to when he got hurt last year, Acuna had walked at an elite 15.5% clip, the fifth-best rate in baseball behind only Juan Soto, Yasmani Grandal, Bryce Harper and Joey Gallo. But so far this season, his eye at the plate has returned to pre-2020 levels, indicated by a still-good, but no longer elite 10.3% rate.

The cause? Pitchers are going right after Acuna more often than they had in the past. His first pitch strike percentage is up by 5.8%, which is in the top 25 league-wide, but his first pitch swing percentage is up by less than half that rate. To put it simply: Pitchers feel more inclined to attack Acuna with a strike on the first pitch (potentially because he's presumably less fearsome coming off his injury), and he has yet to make the necessary adjustment. He's getting behind in counts more often, making it less likely that he'll end up walking.

So while his injury has potentially played a role in his underwhelming power numbers in 2022, it's more about Acuna's slow-to-adjust approach than any lingering physical issue with his leg.

This is where we'd expect to see the largest impact from Acuna's injury. You don't need a medical degree to understand why; reconstructive leg surgery isn't exactly the best thing for an elite athlete's sprint speed. The proof is in the pudding: Acuna has an average feet per second of 27.8 this season (68th percentile), down from his blazing 29.4 f/s from last year (97th percentile).

But while that difference is a bit concerning at first glance, a dig into individual sprint data paints a less dire picture.

It's difficult to find sprint speed numbers for specific plays, but I was able to source out a few of Acuna's run times from people inside the game. And even though his average is lower than in 2021, his peak speed is just as good as ever.

He has eclipsed the 30 f/s mark at least five times already this season, considered an elite run time, including this play from his first week back against the Mets, when he clocked 30.5 f/s.

The data shows us that Acuna is simply being more selective about when to push it down the line on his newly repaired leg, but he can still turn on the afterburners when he wants to.

The rub on Acuna's defense this season is similar: He can push it if he wants, but he has understandably been hesitant about going all-out for balls. Before the injury, Acuna was considered a pretty average outfielder, a superb athlete capable of the occasional jaw-dropping play, but not someone who's usually in the mix for a Gold Glove.

So far in 2022, he has yet to dive for a fly ball and has left his feet to jump for a ball only two times. The first was a liner off the bat of Arizona's Christian Walker, which Acuna misplayed, clearly unwilling to slam full speed into the fence.

But a few weeks later, on June 10 against Pittsburgh, Acuna made a leaping grab to rob Michael Perez of a hit.

The only other notable data point to assess where he's at defensively is a play from May 18 against Milwaukee, in which Acuna got a horrendous jump on a ball in the gap and then didn't have the closing speed to make up for it. The catch probability on this play was only 45%, but Acuna didn't come anywhere close to it.

It's encouraging that, based on this small sample size of three plays, Acuna seems to be moving in the right direction.

Acuna is still ... well ... Ronald Acuna. He's a phenomenal hitter with elite athleticism that shines on the basepaths and emerges from time to time on defense. The further away he gets from his injury, the more willing he'll likely be to sprint full speed and put his body on the line to make plays on defense.'

Until then, there's no real reason to worry. Acuna is still a force at the plate, and he will only improve as the season goes on and he adjusts to how pitchers are trying to attack him.