'It's like the Bahamas': Bills fans brave frigid weather 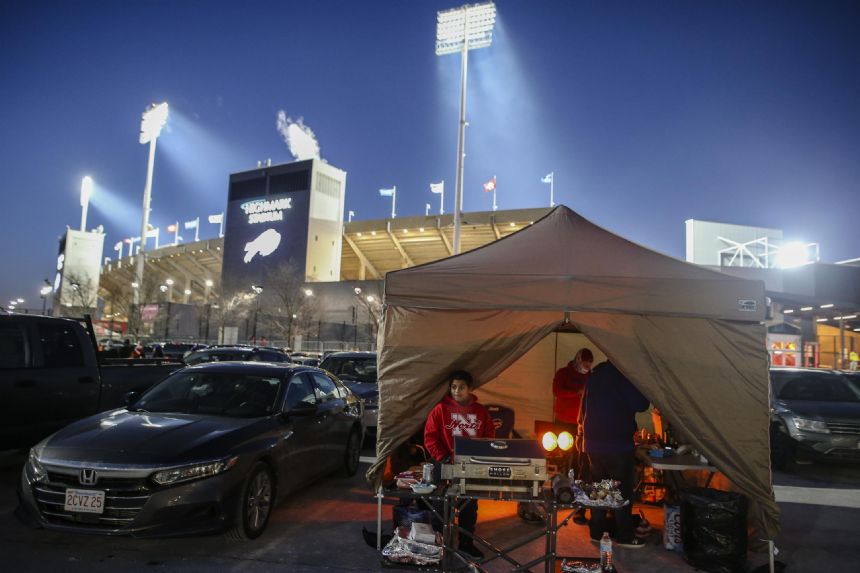 Amid the warm orange glow of Bunsen burners lightning up the parking lots surrounding Highmark Stadium, frigid, single-digit temperatures didn't prevent Buffalo Bills fans from throwing a party in the hours before the team's wild-card playoff game against the New England Patriots on Saturday night.

"This is like the Bahamas right now because there's no wind," said long-time season-ticket holder Rick Ribaulo, who's been attending Bills games since the mid-1970s. "It's family, it's community and it's kind of a rite of passage if you're from Buffalo."

While the Bills-owned parking lots didn't open until 4:15 p.m., many of the private-owned lots were already filling up at 3 p.m. for what could become one of the team's coldest home games in franchise history.

Fans, wearing four and five layers of clothes, came prepared, unloading their vehicles with cases of beer, bratwursts, grills, kerosene heaters and anything else to take the chill off.

Some, such as Quincy McFadden, erected tents with two heat lamps which made the temperature inside feel like a balmy 60.

"I've been doing this since 2007, so I know how to heat when it's cold," said McFadden, a diehard Bills fan who made the seven-hour drive from Massachusetts.

The coldest game in Bills history comes in at zero and with the wind-chill making the temperature feel like minus-32. It happened on Jan. 15, 1994, when the Bills defeated the then-Los Angeles Raiders 29-23 in a divisional playoff game en route to Buffalo making its fourth consecutive and most recent Super Bowl appearance.

The game Saturday was Buffalo's first at home with no restrictions on capacity since a 30-27 loss to Jacksonville in a 1996 wild-card playoff, which proved to be Hall of Fame quarterback Jim Kelly's final game. The Bills hosted two playoff games last season, but only 7,000 fans were allowed because of COVID-19 restrictions.

"Everybody talks about how the '90s was great and amazing, everybody. So you want to be a part of that, too," said Brandon Ammons. "I turned 40 this year and I've never been to a playoff game. To us, it's huge, man. This is our team."

Bills players prepared to take varied approaches to dealing with the cold. Quarterback Josh Allen was going sleeveless in order to keep a better grip on the ball when he's carrying it. Defensive end Jerry Hughes said he wanted to take the field barefoot for pregame warmups.

Jane Tranmer and her family made the six-hour drive from the Adirondacks.

"We're all here to have fun and party and the cold doesn't bother me. That's why we're from upstate New York. It doesn't matter," Tranmer said. "With the excitement, you're warm. "