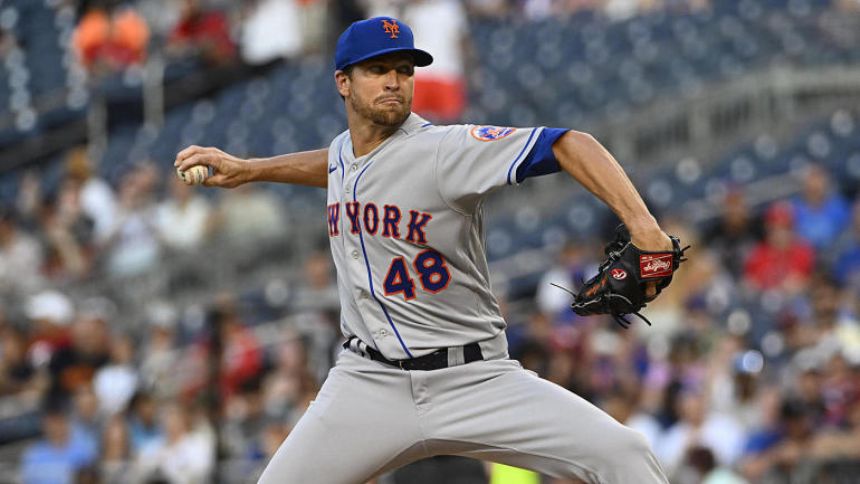 For the first time since July 7, 2021, Jacob deGrom took the mound for the Mets in big-league action. He looked exactly like the deGrom we saw last season, really, which was aesthetically pleasing.'

After all, deGrom is still arguably the best pitcher in baseball when he's healthy. Given that his 2021 season ended prematurely due to elbow issues and the injury he suffered in spring training was to his shoulder, seeing deGrom look like his old self was not a foregone conclusion by any stretch of the imagination. He did, though, even in a Mets loss. (We'll get to that.)'

In five innings of work, deGrom allowed just one run on three hits. He struck out six and didn't walk anyone. He only needed 59 pitches to get through those five innings. His fastball averaged 99.7 miles per hour, topping out at 101.6. He got seven swings-and-misses out of the 21 sliders he threw.'

As I said -- other than the abbreviated pitch count -- this was same old Jacob deGrom.'

Unfortunately for deGrom and his teammates, the rest of the game unfolded in somewhat familiar fashion as well. It was a 5-1 loss to a hapless Nationals team that just traded their two best offensive players, including a generational talent in Juan Soto. The Mets' only run was a solo homer from Francisco Lindor. They only managed five hits. The bullpen coughed up four runs in the two innings followed deGrom's removal.'

Remember those two seasons from deGrom? Remember how the Mets couldn't win at a consistent clip in spite of how amazingly dominant he was? It was so remarkable it was laughable.'

Things got better on this front in 2020 and 2021 and we knew it was a quirky coincidence all along. No one should believe this is something that will continue. It's not a predictive occurrence.'

The biggest takeaway for the Mets on Tuesday should be that deGrom looked great and that gives them the best 1-2 punch in baseball along with Scherzer. They are still in first place, too. It was just a little too familiar to see the rest of the team perform so poorly for deGrom in his return.'