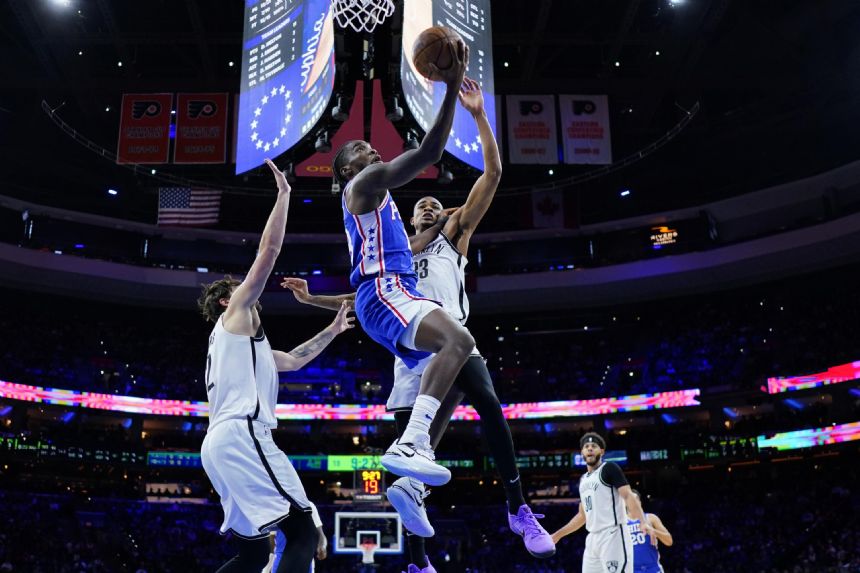 PHILADELPHIA (AP) - James Harden hit two 3-pointers and had a driving layup in the final four minutes against his former Brooklyn teammates and the Philadelphia 76ers stretched their winning streak to six games, outscoring the Nets 137-133 on Wednesday night.

Seth Curry had a season-high 32 points for Brooklyn. Kyrie Irving had 30 for the Nets, who have lost five of the last seven games without Kevin Durant.

The game was the first regular-season matchup between Embiid and former teammate Ben Simmons since a February 2022 trade that sent Simmons to Brooklyn for Harden. Simmons missed the rest of the 2022 season with various injuries, then Embiid was injured and missed the Sixers' win in Simmons' Philadelphia return Nov. 22.

The night started with Simmons matched up on the defensive end against Embiid, who decided to change from his traditional shot facing the basket and muscle down low. Through the night, there were exchanges of words and stares between the two - including right before the start of the second half. It carried through the rest of the rosters, with six technical fouls called.

Brooklyn would start to creep into Philadelphia's lead in the second half. Simmons scored 10 points in the third quarter to keep the Nets close. Curry and Irving, however, would serve as the main catalyst in an 18-4 run that allowed the Nets to tie the game at 120 with four minutes left.

Harden took over after that, with a pair of step-back 3s and a bounce pass to Tobias Harris that allowed Philadelphia to get some breathing room.

Maxey - who has been Philadelphia's sixth man since returning from a broken foot on Dec. 30 - had 16 of his 27 points in the first half.

Nets: Durant is out with a right MCL sprain. He was active on social media, making comments about trash talk between Embiid and Montrezl Harrell and complaining when Embiid made a Degeneration X crotch chop after a three-point play.

76ers: The first quarter was the first time this season in the NBA that both teams had over 40 points. ... On Dec. 5, the Sixers were 12-12 after losing in Houston. Since then, they have gone 19-4 and vaulted from the play-in tournament to the second seed in the East.