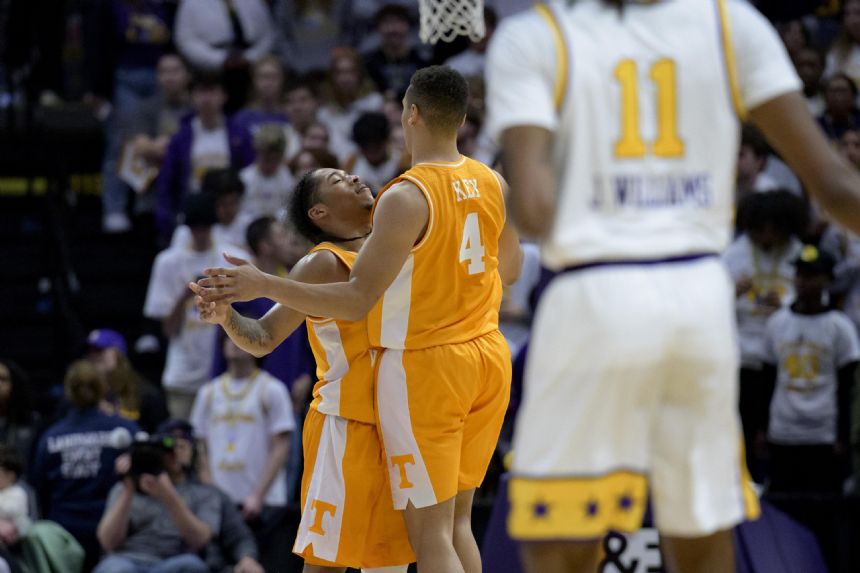 BATON ROUGE, La. (AP) - Josiah-Jordan James scored a season-high 22 points to lead No. 9 Tennessee to a 77-56 victory over LSU on Saturday.

James, who missed eight games in November and December due to injury, made his second straight start for the Volunteers (16-3, 6-1 Southeastern Conference). James had 13 points in 34 minutes against Mississippi State on Tuesday.

Playing 31 minutes Saturday, James was 9-of-16 from the field. He matched his career-high with four 3-pointers. James was one point shy of equaling his career-best which came at Georgia last season. James was consistent throughout the game with 10 first-half points and 12 second-half points.

Tennessee point guard Zakai Zeigler had 12 points and 10 assists, which tied his career high. Julian Phillips and Tyreke Key each had 10 points.

Tennessee, which had lost six of its last eight games against LSU, had a pair of runs in the first half which resulted in a 39-22 halftime lead. Both of those stretches were sparked by the Volunteers' defense.

Trailing 7-6 less than two minutes into the game, Tennessee held LSU without a field goal for eight minutes. Two field goals, one a 3-pointer, by Zeigler helped the Vols go on top 16-9.

Tennessee's advantage was cut to four points at 19-15 when Hannibal made a layup with 7:13 before halftime.

The Vols limited the Tigers to two field goals the rest of the half. Key made two 3-pointers and Phillips added two free throws and a 3-pointer in Tennessee's 20-7 run to close the half. The Volunteers' lead was never less than 15 points in the second half.

Tennesse: The Volunteers moved one-half game ahead of Texas A&M, which lost at Kentucky on Saturday, in the SEC standings. Tennessee ended a four-game losing streak in Baton Rouge with the lopsided victory.

LSU: The Tigers have lost six straight SEC games after beating Arkansas in the league-opener. The last five defeats have all been by double digits. LSU had a 14-game SEC losing streak in 2017. But it has been 56 seasons since the Tigers lost five consecutive conference games by double digits.

LSU plays at Arkansas on Tuesday.