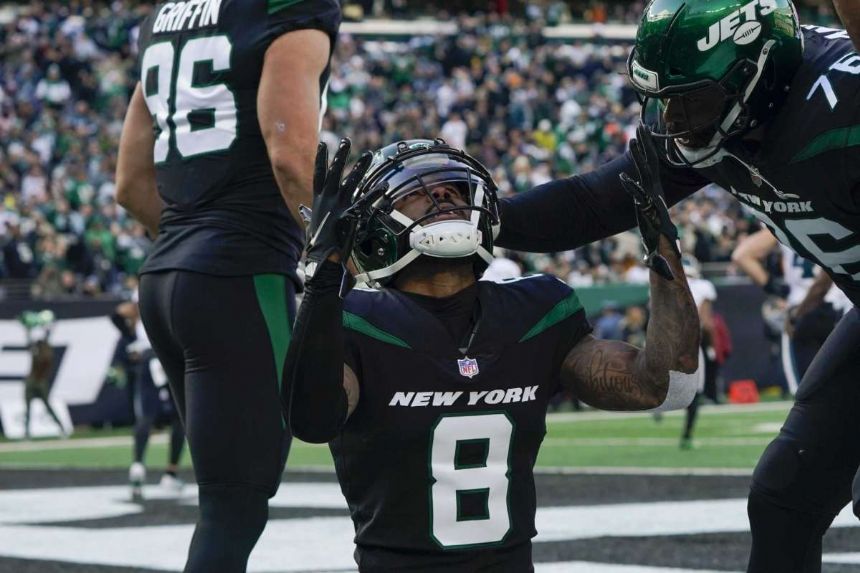 FLORHAM PARK, N.J. (AP) - New York Jets rookie wide receiver Elijah Moore is dealing with a quadriceps injury that could sideline him for the game against the New Orleans Saints on Sunday.

Coach Robert Saleh said the team's leading receiver with 43 receptions would sit out practice Wednesday and would be day to day as the Jets monitor the injury.

"We'll know more as the week goes on," Saleh said. "We're still hopeful that he'll be able to make it Sunday."

The injury to Moore is the latest for what is quickly becoming a banged-up offense, which just recently got back rookie quarterback Zach Wilson from a four-game absence because of a sprained knee.

The Jets placed wide receiver Corey Davis on injured reserve Tuesday with a core muscle injury that requires surgery and will sideline him the rest of the season.

It's unfortunate timing for Moore, a second-rounder from Ole Miss who has been one of the NFL's top wide receivers over the last several weeks. He has five touchdown catches in his last five games - already third most by a rookie in franchise history, trailing only Rob Moore (six in 1990) and Keyshawn Johnson (eight, 1996).

Moore, whose 538 yards receiving also lead the team, missed the entire preseason because of a quadriceps injury. Saleh said the injuries aren't related. The wide receiver had been healthy for the regular season other than sitting Week 4 against Tennessee with a concussion.

With Davis out and Moore potentially sidelined, the Jets could be short-handed at receiver against New Orleans. New York did get some positive news with Keelan Cole being activated from the COVID-19 list after he missed the game last Sunday against Philadelphia.

The Jets also have Jamison Crowder, who's second to Moore with 42 catches, along with Denzel Mims, Jeff Smith and Braxton Berrios. Vyncint Smith, D.J. Montgomery and Tarik Black are also on the practice squad.

NOTES: Saleh said LT Mekhi Becton, out since injuring a knee in the opener and having surgery, still isn't ready to practice but the team is "hopeful" he can return before the end of the season. ... Backup QB Mike White remains on the COVID-19 list and "is still going through the return to play," Saleh said. ... The coach is "very optimistic" DE Bryce Huff, on IR with a back injury, will return next week. ... CB Brandin Echols (quadriceps) was designated to return to practice. ... Among roster moves made Tuesday: The Jets brought back K Matt Ammendola to the practice squad, released DB Jarrod Wilson from the active roster, signed RB Austin Walter from the practice squad, and cut WR Keelan Doss from the practice squad.