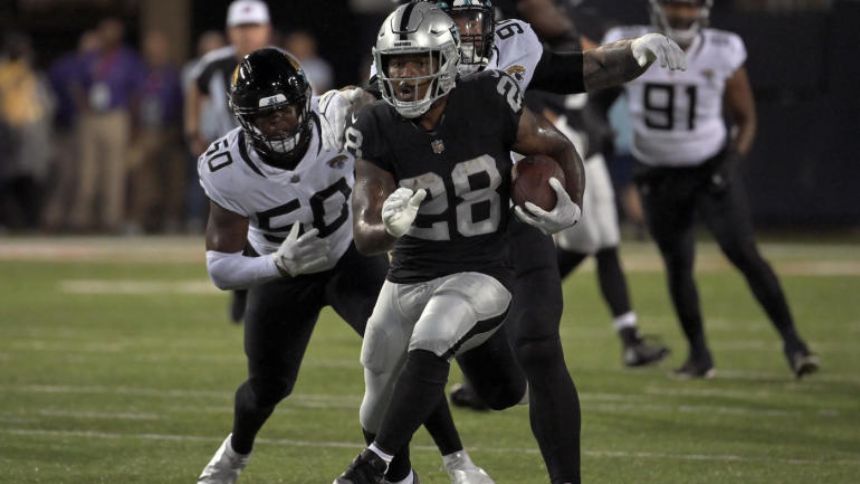 The Las Vegas Raiders were able to start their preseason on a positive note by defeating the Jacksonville Jaguars in the Hall of Fame Game, 27-11. Of course, this game didn't feature many of the heavy-hitters that we expect to see at some point over this exhibition season and especially during the regular season, but there was one notable star on the field Thursday night: Josh Jacobs.'

The veteran running back started the game even as the rest of the first-team offense -- like Derek Carr, Davante Adams, Darren Waller, and others -- watched from the sideline. He played the first two series of the game and finished his night rushing for 30 yards on five carries while catching both of his targets for 14 yards. By all accounts, Jacobs looked good, but should there be any concern that he's working with the B-team?

"I always think it's good for backs to carry the ball in the preseason," head coach Josh McDaniels said after the game, via NFL.com. "There's a lot of things that happen when you're getting tackled and hit that you can't simulate in practice. I think all our guys had the ball tonight. I think all our guys either caught it or were handed the ball and had to get tackled. We can't really simulate that or rep that in practice."

While there is a case to be made for backs like Jacobs to see some live reps, it is at least notable that he's not being preserved like the rest of the projected starters. After all, the Raiders did decline to pick up the former first-round pick's fifth-year option earlier this offseason, meaning he'll be looking at unrestricted free agency after this offseason.'

The club also drafted Zamir White in the fourth round this past spring and the Georgia product looked good as well, rushing for 52 yards on 11 carries and catching three of his four targets for 23 yards.'

"He ran hard with the ball in his hands and is tough to tackle," McDaniels said of White. "He finishes runs the right way, brings a physical element to the game and the team. It was a good opportunity for him to get in there and do that at our level and play in the kicking game some. Like I said, there's going to be some things that we have to tweak and clean up, but I thought for him to get out there and establish - that's the style of runner he was at Georgia, and then to see him do it here was good."

Naturally, the Las Vegas backfield will be worth watching as the preseason rolls on to gauge whether or not Jacobs can be a true lead back or whether or not White along with veteran Kenyan Drake will make this more of a committee throughout the regular season.'