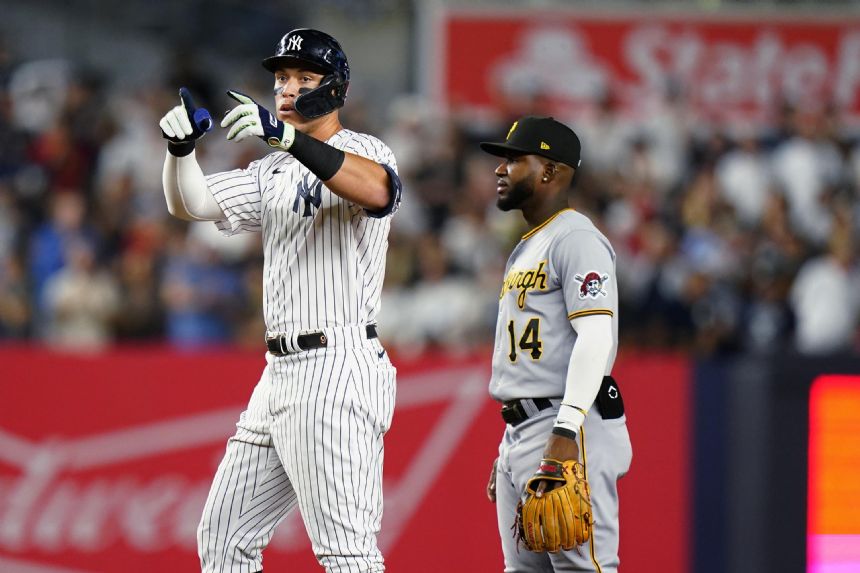 NEW YORK (AP) - Aaron Judge disappointed fans by staying stuck at 60 homers but doubled twice and scored on Oswaldo Cabrera's first-inning grand slam that started the New York Yankees to a 14-2 rout of the Pittsburgh Pirates on Wednesday night.

Judge doubled on the first pitch to him in the first and fifth innings. Given another time up during an eight-run eighth inning, Judge walked on four pitches from rookie Eric Stout as the sellout crowd of 46,175 booed loudly.

Cabrera and Gleyber Torres had five RBIs each. Torres homered twice in the eighth inning, raising his season total to 23.

Luis Severino (6-3) returned from a strained right lat muscle that had sidelined him since July 13 and allowed one run and two hits in five innings with six strikeouts.

Willy Adames hit a go-ahead home run in the sixth against Taijuan Walker, his fifth homer in 10 games and 31st this season for the Brewers, who are chasing Philadelphia for the third and final NL wild-card berth.

The Mets maintained a one-game division lead over Atlanta.

Walker (12-5) had allowed only four runners before Adames homered leading off the sixth.

Ronald Acuna Jr. drove in an early run and scored another for playoff-bound Atlanta, which remained one game behind the New York Mets in the NL East.

Andres Machado (2-0) pitched a scoreless sixth, Carl Edwards Jr. escaped a jam in the eighth and Kyle Finnegan pitched a perfect ninth for his 11th save in 15 chances.

The Orioles snapped a nine-game losing streak to the Tigers dating to last season. Baltimore moved within 4 1/2 games of Tampa Bay in the AL wild-card race.

Lyles (11-11) allowed one run with three hits with six strikeouts and no walks with 94 pitches. His previous complete game occurred on Sept. 30, 2012, for Houston against Milwaukee.

Tucker drilled his 29th homer into the right-center field stands off Brooks Raley (1-2).

Ryan Pressly worked the ninth for his 30th save in 34 chances.

Houston second baseman Jose Altuve was hit on the left elbow by Corey Kluber's pitch in the fifth and left one inning later with elbow discomfort.

CINCINNATI (AP) - Jonathan India and Kyle Farmer each drove in two runs, Donovan Solano added a solo homer and Cincinnati beat Boston at home for the first time since June 13, 2008.

India drove in the tiebreaking run in Cincinnati's three-run fifth. The Reds had lost eight straight at home to Boston in their infrequent interleague meetings.

Chase Anderson (2-3) gave up three hits and one run with no walks in five innings, earning his second straight win in his fifth start of the season.

Patrick Wisdom hit his 23rd homer for the Cubs, who had only four hits.

Down 3-1, the Cubs scored three in the eighth without a hit against Marlins relievers Steven Okert (5-5) and Dylan Floro.