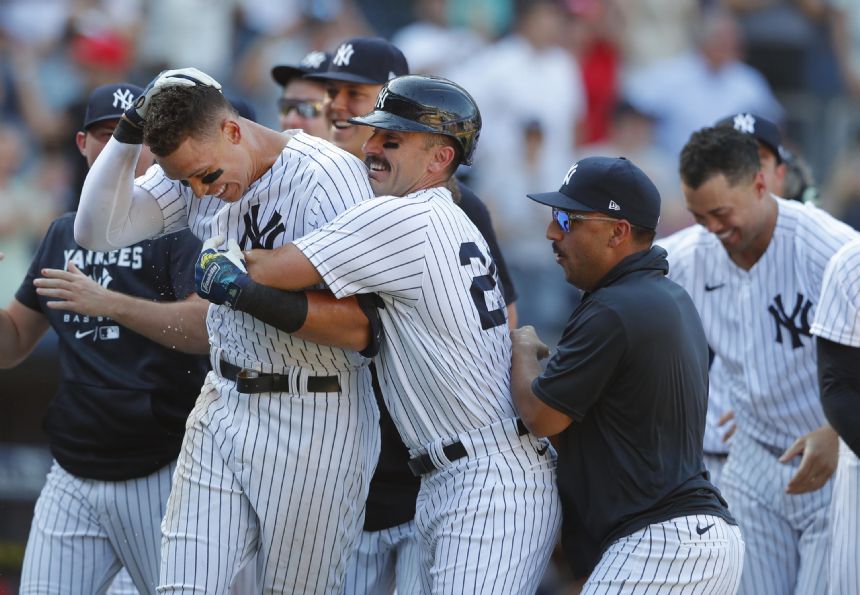 NEW YORK (AP) - Aaron Judge drove a three-run homer in the 10th inning for his second walk-off hit against the Astros in four days, and the New York Yankees recovered after nearly being no-hit for the second consecutive game to beat Houston 6-3 on Sunday for a four-game split between the AL's top teams.

Giancarlo Stanton ended a historic hitless drought for New York with a one-out homer in the seventh against Jose Urquidy, and DJ LeMahieu followed with a tying two-run drive in the eighth off Phil Maton.

After Michael King (5-1) stranded the bases loaded in the 10th, Judge connected off Seth Martinez (0-1) for his major league-leading 28th home run.h

ANAHEIM, Calif. (AP) - A lengthy bench-clearing brawl resulted in the ejections of six players and both managers in the second inning.

Luis Rengifo homered and David MacKinnon drove in the tiebreaking run with a single in the seventh. Marco Gonzales (4-8) pitched five-hit ball into the seventh inning of a hard-luck loss.

Jose Suarez (1-2) greatly helped the Angels' depleted bullpen when he relieved Wantz and struck out eight over six innings of five-hit ball. Oliver Ortega got six outs for his first major league save,

SAN DIEGO (AP) -Kyle Schwarber hit a go-ahead, three-run homer in the seventh off Nabil Crismatt (4-1) as Philadelphia rallied from a 5-2 deficit, one day after losing NL MVP Bryce Harper with a broken left thumb.

The Phillies are 17-6 since Rob Thomson replaced Joe Girardi as manager.

Cleveland has lost four straight since a 7-2 trip.

ST. PETERSBURG, Fla. (AP) - Shane McClanahan (8-3) struck out 10 over seven innings, allowing one run and four hits. He lowered his major league-leading ERA to 1.77 ERA and grabbed the big league lead in strikeouts with 123.

Tampa Bay took a 4-1 lead in the seventh on Ji-Man Choi's run-scoring double and RBI singles by Josh Lowe and Isaac Paredes off Anthony Banda, who replaced Tyler Beede (0-1) with one on and two outs.

It appeared the inning was over with the score still 1-1 when Randy Arozarena was called out attempting to steal second. The call by second base umpire Dan Merzel was overturned when a video review shortstop Diego Castillo missed the tag.

CHICAGO (AP) - Dylan Cease (6-3) struck out a career-high 13 and allowed four hits over seven innings, Gavin Sheets hit a two-run homer in the second against Jordan Lyles (4-7) and Chicago avoided a four-game sweep,hhhhh

Kendall Graveman struck out Trey Mancini for his third save as the White Sox snapped a four-game skid. The Orioles' season-high four-game winning streak ended.

MINNEAPOLIS (AP) - Byron Buxton had three hits, including an RBI triple for the second straight game, and Minnesota opened a two-game lead over second-place Cleveland heading into a five-game series at the Guardians.

Joe Ryan (6-3) grinded through 102 pitches over five innings for his first win in more than a month, and Jhoan Duran struck out two in a perfect ninth for his fifth save.

Oakland took two of three from the Royals, ending an eight-series losing streak. The A's won back-to-back games for the first time since May 24 and 25 at Seattle. They have lost 30 of their last 39 games.

Domingo Acevedo (1-1) won, and Lou Trivino got his fourth save. Brady Singer (3-3) gave up five runs and seven hits in a career-high 8 1/3 innings.

CHICAGO (AP) - Willson Contreras hit a tiebreaking single in the 10th off Zack Thompson (1-1) to drive in his third run of the game, and Chicago overcame a 5-0 deficit.

Cardinals starter Jack Flaherty left after two innings because of right shoulder tightness, and the Cubs tied the score with a five-run fourth. The Cardinals have lost three of their last four games and seven of their last 10.

David Robertson (2-0) retired three straight batters, and the Cubs took two of three from their rival. Chicago has won four of its last five series in St. Louis.

MILWAUKEE (AP) - Rowdy Tellez hit a pair of two-run homers against his former team, going deep in the first and second innings off off Jose Berrios (5-4), and Milwaukee took two of three.

Texas scored three in the ninth inning against Francisco Perez on Nathaniel Lowe's RBI single and Jonah Heim's two-run homer. Tanner Rainey came on for his 10th save.

Glenn Otto (4-3), activated from the COVID-19 list before the game, allowed the six runs in two innings over his first appearance since June 4.

SAN FRANCISCO (AP) - Tyler Mahle (3-6) struck out seven in 6 2/3 innings while allowing three runs and four hits for his first victory since May 13.

Nick Senzel singled three times on a day when every Reds starter had at least one hit.

Anthony DeSclafani (0-2), who played for the Reds from 2015-20, retired eight batters and allowed seven runs and seven hits.

Former AL Cy Young Award winner Dallas Keuchel made his debut for Arizona after signing a minor league contract on June 6. He gave up four runs and six hits in 4 1/3 innings while striking out seven and walking three.