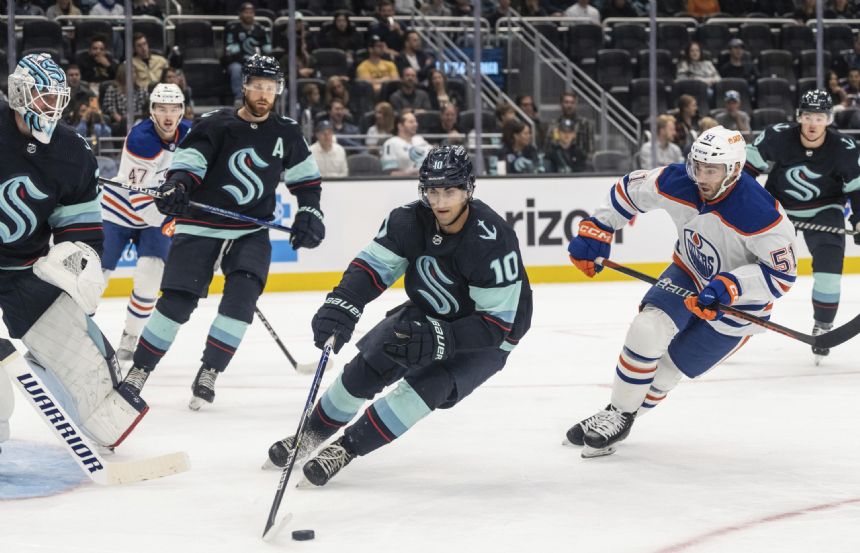 SEATTLE (AP) - The Seattle Kraken's first season ended up looking like most other NHL expansion seasons.

And still there was a significant feeling of underachievement after the team launched with the hope of contending for a playoff spot in Year 1.

Seattle's first year was one stumble after another. Bad luck. Bad performances. An uncanny ability to give away games late and an overall inability to capture its new market. Seattle was so bad so early it was difficult for the Kraken to make the hoped-for inroads with the fan base.

All that puts more pressure on Seattle to show improvement in the second season.

"I think each guy is hungry to prove to ourselves and prove to each other that we can be a lot better, more competitive and being in a lot better spot this year come March and April," forward Jaden Schwartz said.

There's no doubt Seattle has made improvements. The team's scoring problems should be addressed through the addition of Andre Burakovsky and Oliver Bjorkstrand. Throw in a full season of Matty Beniers and first-round pick Shane Wright, and Seattle has the depth and talent up front it simply lacked a year ago.

The defense also received a boost with the signing of veteran Justin Schultz, but the biggest key for Seattle will be improvement from starting goalie Philipp Grubauer, who struggled early last season.

Burakovsky and Bjorkstrand immediately slot into Seattle's top forward lines. Burakovsky had a career-high 61 points last season on his way to winning the Stanley Cup with Colorado. Bjorkstrand had a career-best 57 points for Columbus and was acquired in a trade by general manager Ron Francis when the Blue Jackets found themselves in a salary cap crunch.

Seattle finished 29th in goals scored last season and its power play was even worse at 30th in the league. Burakovsky and Bjorkstrand should take some of the pressure off Jared McCann, Yanni Gourde and Jordan Eberle, the only three Kraken forwards to top 40 points last season. Having Schwartz and Brandon Tanev back from significant injuries should help as well.

"We need to find ways to be better offensively," coach Dave Hakstol said. "Part of that is some of our personnel and the additions that we have, but also a big part of that is just being better at some of the areas in terms of getting inside and finding some of those scoring opportunities."

Beniers looked the part of a future star during his limited 10-game stint last season. He had three goals and six assists after joining the Kraken. And if the hopes for his first full season could be any higher, Beniers sniped a spectacular goal for Seattle's first of the preseason.

"I don't know if they know who I am, but hopefully I can pick up where I left off last year," Beniers said.

Beniers is likely to anchor one of Seattle's top lines, possibly with either Burakovsky or Bjorkstrand alongside. But he may not be the only rookie to be a major contributor. There's a strong case for Wright to be one of Seattle's top four centers now, meaning starting his NHL career at age 18 rather than spending another season playing at the junior level in Ontario.

One more Seattle rookie could be defenseman Ryker Evans. While he's most likely to start in the AHL, Evans could be an early call if another left-shot defenseman is needed.

Seattle could make its biggest improvement if Grubauer can rediscover the form that made him a finalist for the Vezina Trophy two years ago.

Grubauer was a major disappointment in his first season with Seattle. His 3.16 goals-against average was in the bottom third in the league and his .889 save percentage was the worst among NHL starters. Some of Grubauer's early troubles were the result of a lack of chemistry with his defensemen.

"It didn't work out for us last year. We didn't have the year we wanted to have as a team and individual," Grubauer said. "So it's time to step up and make those changes."