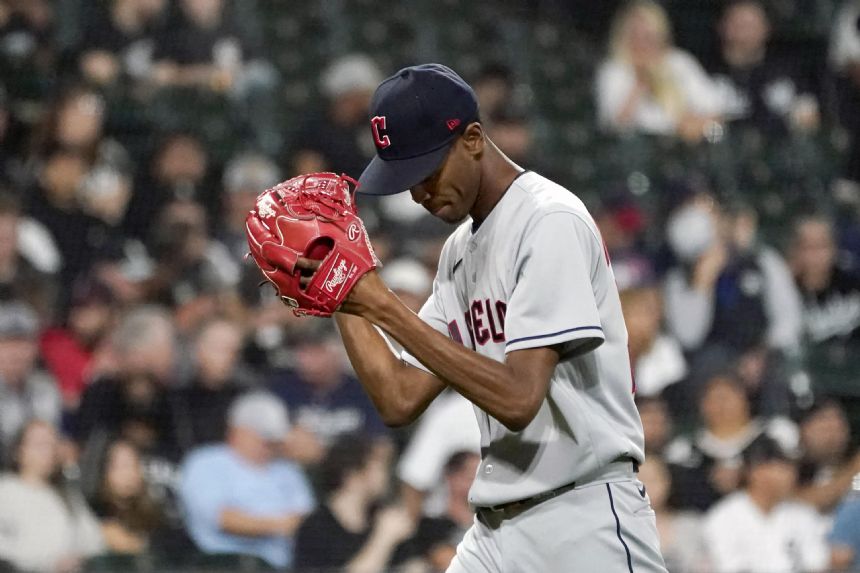 Kwan had hits in each of his first three at-bats, capped by his fifth homer of the season off Lance Lynn (7-6) on the first pitch of the fourth inning. Kwan is batting .538 (14 for 26) over his last five games.

The White Sox (76-73) lost for the third time in their last five games.

McKenzie (11-11) gave up two runs and six hits while matching his career high with eight innings. He walked none and finished one strikeout shy of his career high, set against the White Sox on Aug. 19. McKenzie is 2-0 with 2.16 ERA in four starts against Chicago this season.

Josh Naylor hit his 19th home run, a two-run shot in the seventh, off Jose Ruiz for the Guardians.

Kwan started the game with a single and scored on a fielder's choice. He singled off Lynn in the second before pulling his homer down the right field line. Kwan leads all major league rookies with 40 multi-hit games, including 14 three-hit games. Kwan (153) has the most hits by a Guardians rookie since Kenny Lofton (164) in 1992.

McKenzie received defensive help from center fielder Myles Straw, who made a sliding catch in left center to rob Jose Abreu of an extra base hit to end the sixth.

Yoan Moncada led off the fourth with a home run to pull Chicago to 6-1, but McKenzie avoided further trouble until the seventh. Eloy Jimenez led off with a double and scored on a single by Gavin Sheets to make it 8-2. McKenzie struck out Romy Gonzalez with runners at first and second to end the inning.

The White Sox, who entered Wednesday's game ranked second to last in the majors with a .982 fielding percentage, committed two errors that led to runs.

Moncada's throwing miscue to first base on a potential double play enabled the Guardians to add another run in the first on an infield hit by Andres Gimenez.

Naylor led off the fourth with a fly to shallow left. Moncada tracked the ball before peeling away, and the ball hit the heel of Andrew Vaughn's glove and bounced away for an error. The Guardians followed with three consecutive hits that helped them extend their lead to 5-0.

Lynn needed 31 pitches to get out of the first, and Vaughn's error led to the Guardians' three-run third.

Lynn was charged with three earned runs after allowing two runs or fewer in each of his previous seven starts.

The White Sox fell to 13-8 under acting manager Miguel Cairo, who took over after Tony La Russa left temporarily for medical reasons.

Cairo remained critical of his managing in Tuesday's 10-7 loss but knows he must move on. "It was a tough night because you want to second-guess yourself," Cairo said. "I looked back, checked and said, 'you got to move on.' You just cannot take that game and bring it to the next game."

Guardians: Selected the contract of OF Will Brennan from Triple-A Columbus and recalled INF Gabriel Arias from Columbus. Brennan made a sliding catch in the first and hit a single for his first major league hit in the third. ... OF Richie Palacios was optioned to Columbus, and INF Ernie Clement was designated for assignment.

White Sox: CF Luis Robert (left hand soreness) didn't start and remains day-to-day, Cairo said. Robert is 1 for 28 (.036) in his last 10 games. ... SS Tim Anderson (left middle finger tear) definitely will rejoin the Sox before the end of the season, but his daily availability is uncertain. ... Cairo was unsure when RHP Joe Kelly (family medical leave) would rejoin the Sox. Kelly was eligible to return Wednesday.