LEADING OFF: Juneteenth around MLB and Father's Day 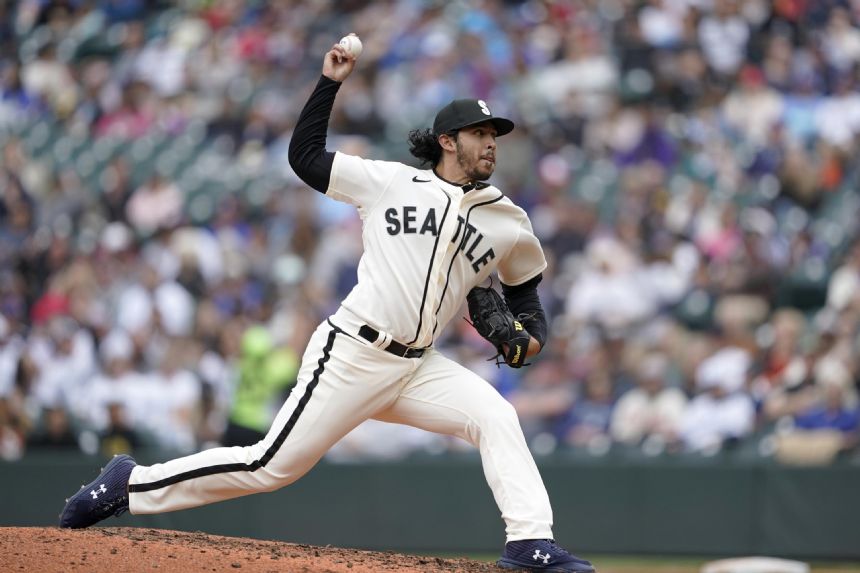 A look at what's happening around the majors on Sunday:

The nation's newest federal holiday is being celebrated in many ways this weekend at Major League Baseball parks.

The first 10,000 fans attending the Angels-Mariners game at T-Mobile Park will get a replica hat from the 1946 Seattle Steelheads, a team in the Negro Leagues. The Mariners wore Steelheads jerseys on Saturday in the first game of a doubleheader.

Fans who buy tickets for the St. Louis-Boston game at Fenway Park through a special offer were to receive a Red Sox jersey in Juneteenth colors featuring the Juneteenth flag.

At PNC Park, Pittsburgh Mayor Ed Gainey, who is Black, threw out the first pitch Saturday before the Pirates hosted the Giants.

Juneteenth commemorates the date when news of the Emancipation Proclamation reached enslaved people in Galveston, Texas. The proclamation was signed by President Abraham Lincoln on Jan. 1, 1863, and declared free all enslaved people in Confederate states. Some of the newly freed weren't aware of their freedom until U.S. Maj. Gen. Gordon Granger reached Galveston, Texas, on June 19, 1865, to enforce the proclamation.

New York Yankees manager Aaron Boone will have family on his mind - and on his feet - on Father's Day in Toronto.

Boone plans to wear a pair of special shoes for the series finale against the Blue Jays. Designed by Brooklyn artist Andy Freidman, the shoes feature images of Boone's grandfather, father and brother, all of whom also played big league baseball.

"I was like 'How about making it a family theme for me?' with my family in baseball and incorporate my kids in it," Boone said. "He took it from there and created this and it's pretty cool."

The design also incorporates images of Boone's own children.

The White Sox and Astros play the rubber match of a three-game set -- and it's a major one for managers Tony La Russa and Dusty Baker, too.

The longtime skippers are 105-105 against each other in regular-season games since first facing each other in 1996. Chicago is also slated to host Houston for four games in August, but with the 77-year-old La Russa possibly on the hot seat for struggling Chicago, this could be his final matchup with the 73-year-old Baker.

The Yankees are on the cusp of their second winning streak of at least 10 games this season as they send Gerrit Cole to the mound against Toronto. New York has won nine straight and 16 of 17, closing in on its season high of 11 straight victories set April 22-May 3.

Cleveland ace Shane Bieber, who's from Southern California, pitches at Dodger Stadium for the first time in the wrapup of a three-game series.

Bieber grew up an hour south of Chavez Ravine in Laguna Hills and attended Cal-Santa Barbara. He said he'd been to only a couple of Dodgers games while growing up.

"I've heard a lot about the atmosphere. I know the history," said Bieber, the 2020 AL Cy Young Award winner. "I'm excited to experience it firsthand and add it to my resume."

Bieber (3-3, 3.01 ERA) is part of a surging uardians squad that had won five straight and 14 of their last 17 going into Saturday.

Cleveland third baseman Jose Ramirez didn't start Saturday's game because of a sore right thumb. He'll have it checked again before the series finale. He leads the American League with 62 RBIs.

Seattle right-hander Logan Gilbert has a chance to join the major league leaders at eight wins when he faces Mike Trout and the visiting Angels.

Gilbert (7-2) has won three straight decisions, including his last outing against Minnesota when he tossed six shutout innings.

In his past four starts, Gilbert has a 1.44 ERA and 21 strikeouts in 25 innings. In his 13 starts, he has allowed more than three earned runs just once and has pitched at least five innings in every start.

The 25-year-old is in his second full season and was the AL pitcher of the month in April.