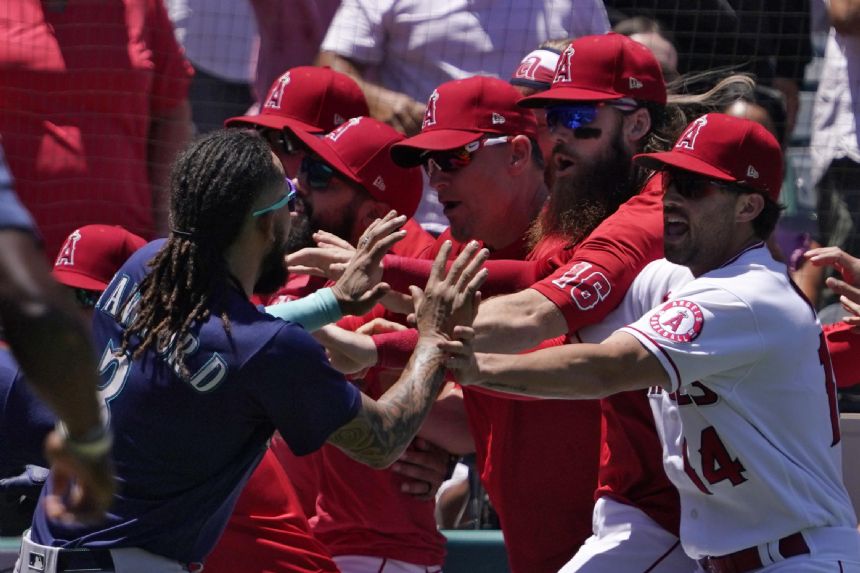 A look at what's happening around the majors on Monday:

Major League Baseball will certainly soon be handing out penalties after the Seattle Mariners and Los Angeles Angels got into a huge brawl this weekend at Anaheim.

There were eight ejections Sunday - both managers, plus three players on each team. The skirmish stopped and started twice before Angels closer Raisel Iglesias threw a tub of sunflower seeds and another bucket of gum onto the infield.

Seattle's Jesse Winker was hit by the first pitch of the second inning by Andrew Wantz. In the first, Wantz threw behind the head of Julio Rodriguez.

The pitch to Rodriguez certainly appeared to be a response to Erik Swanson's 95 mph fastball near Mike Trout's head in the ninth inning Saturday night.

The game was delayed about 18 minutes.

Red Sox outfielder Jarren Duran and closer Tanner Houck won't be with team in Toronto because they aren't vaccinated for COVID-19. Houck will throw batting practice to Duran at Fenway Park this week.

Ronald Acuna Jr. likely will benefit as the Braves have a day off while dealing with his injured left foot.

The Atlanta star fouled a ball off himself Saturday night. He wasn't in the lineup Sunday night against the Dodgers -tests showed no fracture, but he said he couldn't put pressure on his foot.

Acuna is hitting .281 with seven homers and 18 RBIs in his return this year from a torn ACL in his right knee. He tore the ligament last July when he landed awkwardly while attempting to make a catch in right field in Miami and missed the rest of the season as Atlanta went on to win the World Series.

Acuna leads the Braves with 13 stolen bases and has returned to an everyday role in right field after spending time as the designated hitter early in his comeback.

The Cardinals will see how Jack Flaherty is feeling, a day after he exited a start after two innings because of right shoulder tightness.

Flaherty was making his third start this season after missing the first 64 games while recovering from surgery on his right shoulder. He gave up one hit, struck out two and walked two, throwing 49 pitches against the Cubs.

The 26-year-old righty had allowed five earned runs in six innings during his first two starts this season for St. Louis.

White Sox right-hander Lucas Giolito (4-4, 5.40 ERA) looks to get back on track after a recent rut.