Lightning strike six times in Game 3 win, plus what's next for Kyrie Irving? 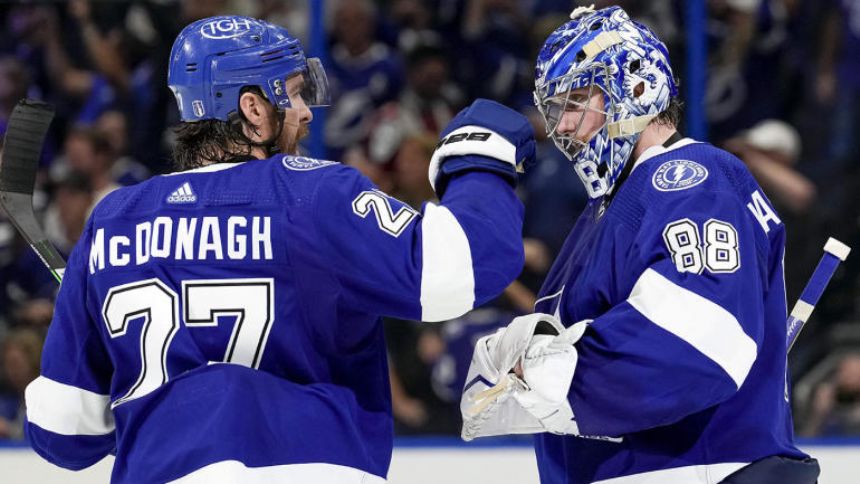 Happy Tuesday, everyone. Hope you're well.

Right from the top, we have some breaking news to quickly hit: Brooks Koepka is the latest multiple-time major winner to join LIV Golf, . As our golf expert Kyle Porter explained, Koepka is "arguably the highest-profile player to join the Saudi Arabian-backed league."

Now, to the rest of the news.

The Tampa Bay Lightning'finally found some offense and now find themselves right back in the Stanley Cup Final. After scoring three goals combined in the first two games, Tampa Bay found the back of the net twice as often in Game 3 alone, a 6-2 win over the Avalanche.'The series is now 2-1 in favor of Colorado.

The Lightning are the first team to win a Stanley Cup Final game after losing the previous game in the series by seven or more since 1919.

And it was the exact response the Lightning needed -- not just the result, but the re-emergence of their stars on offense and in net. It also helped to be back home: the Lightning have won eight straight at Amalie Arena. They'll look to keep the good times rolling in Game 4 tomorrow night.

On Monday morning I told you the NBA never sleeps, and then just hours later it was reported that'Kyrie Irving and the Nets'reportedly'. Now the star point guard could be on the move.

The key word here is "could." Irving may end up'staying in Brooklyn because, as NBA expert Sam Quinn ...

Even so, with this latest development, it's time to look at potential trade partners. And one team that comes to mind immediately is the Los Angeles Lakers. Maybe.

Of course, there are 'on Sam's list. This is an excellent look at the latest drama surrounding Irving, and it may prove prescient in the coming weeks.

The NBA Draft is now just two days away, and things are heating up around the league -- especially regarding the No. 1 pick. Check out the odds for top overall pick from Caesars Sportsbook:

Smith had been a much bigger favorite to be the first player to hear his name called, but Banchero is making a late charge. Perhaps executives have been reading our college basketball reporter Matt Norlander? Matt just released , and here's who's on top:

Smith, Holmgren and Banchero (in some order) will likely be the top three picks Thursday night. But -- spoiler alert! -- Matt has only two of those three in the top three of his mock draft, with .

This was approached from a different angle than most others, and you should check it out.

News flash: The New York Yankees are good. Like, really good. Like, at their current pace, one of the best teams we've ever seen good. The Yankees beat the Rays 4-2'last night to improve their record to 50-17.

That, of course, is a good recipe to put yourself atop . More importantly, as Snyder explains, there's no such thing as peaking too early.

Here's the entire top five, which is unchanged from last week:

It's often said that the NFL stands for "Not For Long." Stars one year are out of the league soon thereafter. It's a league that moves very quickly -- if you don't produce, you get left behind.

So, 'Our NFL expert Chris Trapasso took a look at nine different players, and :

It could come down to that last sentence. Is there a team that wants Mayfield?'AP Sports NFL insider Jonathan Jones reported last week that Carolina had , but the issue is Mayfield is due nearly $19 million this season, and .

Mayfield's slow split from Cleveland -- he's still on the Browns' roster -- has been a messy one. No matter what happens with Deshaun Watson, it doesn't seem like Mayfield will play in Cleveland again. Will he play in Carolina, though? Will he just not play at all this year? It's one of the league's most intriguing subplots as the offseason rolls on.

As for eight other players entering potential make-or-break years, check out Chris' list .