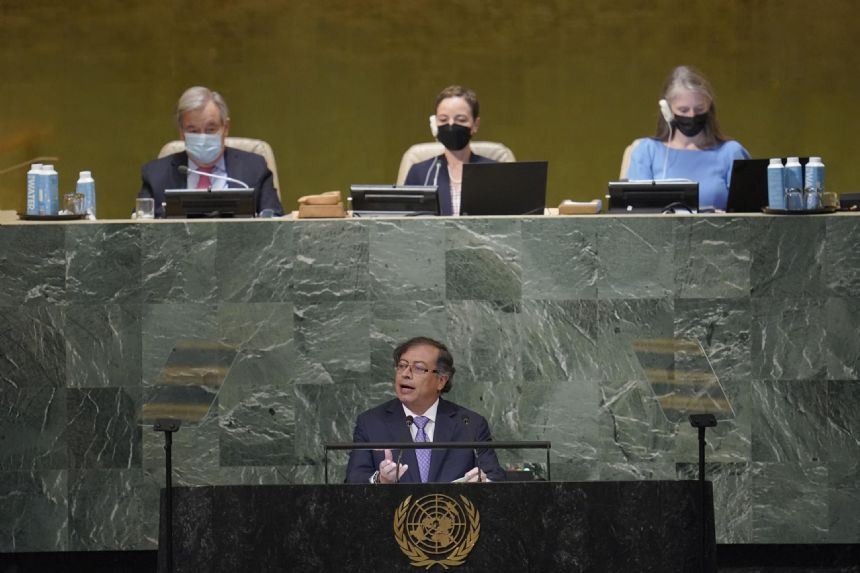 Colombia President Gustavo Petro has called for an end of the war on drugs, calling it "irrational.

As a major drug production country, Colombia has been ravaged by drug-related violence.

Petro also made a proposal to the U.N. General Assembly to forgive countries' debt in exchange for their conservation of forests.

Russia's war in Ukraine is the conflict in the ex-Soviet sphere that has absorbed most of the world's attention.

But a recent flare-up on the border between Kyrgyzstan and Tajikistan briefly took centerstage at the United Nations on Tuesday.

Sadyr Zhaparov, the president of Kyrgyzstan, was the seventh world leader to speak on the first day of the general debate. He used his allotted time at the dais to describe the territorial disputes engendered by the collapse of the Soviet Union. The fighting has killed at least two dozen people.

The clashes began last week, with each side trading blame while the genesis of the conflict remained unclear. Last year, at least 55 people were killed near the border following a dispute over water rights and Tajikistan's installation of surveillance cameras.

Zhaparov identified Tajikistan as the instigator, saying his country was "deeply saddened by the unjustified armed aggressions" and willing to negotiate without ceding a "centimeter of its land."

Tajik authorities have in turn accused Kyrgyzstan of aggression, including the destruction of a mosque and targeting of school. Late last week, the leaders of both countries met at a summit of the Shanghai Cooperation Organization in Uzbekistan and agreed to work to stop the fighting.

A minister from Tajikistan will speak toward the end of the summit.

Kyrgyzstan is a close ally of Russia, which Zhaparov described as "our biggest strategic ally" in a meeting with Russian President Vladimir Putin last year. Zhaparov did not mention the Ukraine invasion during his speech at the U.N. General Assembly.

Truss, who took office just two weeks ago, is meeting fellow leaders including U.S. President Joe Biden and French President Emmanuel Macron in New York before making a speech to the U.N. General Assembly on Wednesday. The gathering was dominated by talk of the war in Ukraine and the energy crisis it has spawned.

Truss said Tuesday with an increasingly aggressive Russia and an assertive China, "We need to work more closely with our allies."

But the new British leader has to build bridges with key allies left alienated by Britain's handling of its departure from the European Union. Biden has expressed concerns that Brexit could destabilize peace in Northern Ireland, and EU leaders are angry at the U.K. government's combative approach in post-Brexit trade talks.

Ukraine is the chief topic on the first day of the U.N.'s general assembly meeting in New York.

World leaders responded to news that four leaders of Russian-controlled areas of Ukraine plan to hold referendums for the territories to become part of Russia.

Scholz told reporters in New York on Tuesday that "Ukraine has every right to defend the integrity and sovereignty of the country and its own democracy."

Scholz's office said that he reiterated that stance in a meeting with Turkish President Recep Tayyip Erdogan on the sidelines of the U.N. General Assembly meeting. He said the referendum results won't be recognized.

Erdogan said Turkey will continue efforts to end the war, to find a diplomatic solution that allow sides emerge from the war in an "honorable way."

Senegalese President Macky Sall has told the U.N. General Assembly that Africa must play a larger role in international decision-making.

Sall said Tuesday that Africa has suffered enough of the burden of history, and wants to be a pole of stability and opportunity. Sall, the current chairperson of the African Union, called for the continent to have a seat in the influential G20 group of nations.

In his comments to the U.N., Sall also pressed for a "fair and equitable energy transition," emphasizing that more than 600 million Africans still lack access to electricity on a continent of 1.4 billion.

Brazil's President Jair Bolsonaro, who is seeking reelection next month, used his speech at the U.N. General Assembly to promote the merits of his administration.

Bolsonaro's speech Tuesday focused heavily on the economy, starting with the welfare program distributed to millions of Brazilians during the pandemic. The program was recently renewed until December. Bolsonaro also stressed a falling unemployment rate and disinflation in Latin America's largest nation.

He also took a dig at his main rival, former President Luiz Inacio Lula da Silva, who leads all polls to return to the presidency he held between 2003 and 2010. Bolsanaro pointed to da Silva's conviction on money laundering and corruption charges.

The far-right leader also defended Brazil's willingness to negotiate over the Russian invasion of Ukraine, calling for a ceasefire but renouncing sanctions and economic isolation.

Bolsonaro was the first world leader to speak during debate on the first day of the U.N. General Assembly's meeting. U.S. President Joe Biden would traditionally speak second, but his time was pushed to Wednesday because of the funeral of England's queen.