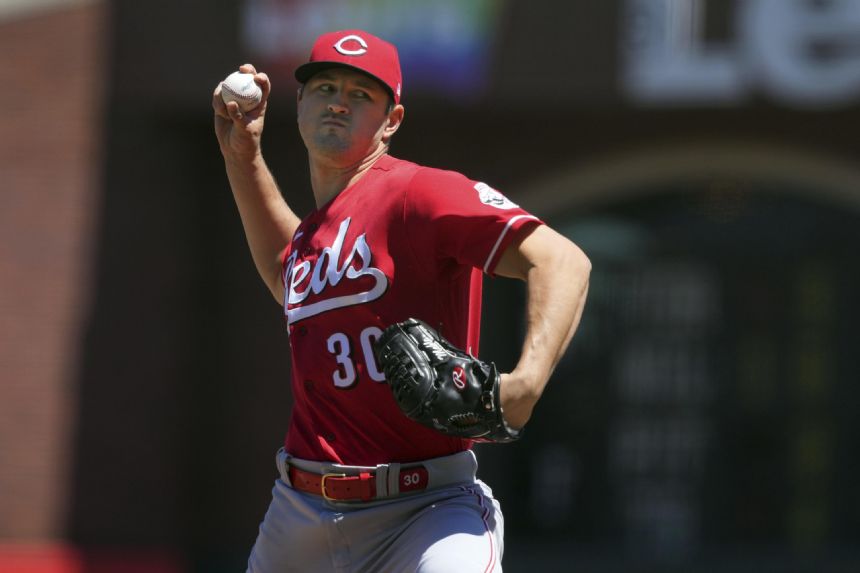 SAN FRANCISCO (AP) - Tyler Mahle pitched into the seventh inning for his first victory in more than a month, and the Cincinnati Reds routed the San Francisco Giants 10-3 on Sunday.

Nick Senzel singled three times to pace Cincinnati on a day when every Reds starter had at least one hit and seven drove in one run or more.

Joey Votto hit an RBI double as part of the Reds' seven-run third inning, helping Cincinnati take two of three from San Francisco after dropping seven in a row.

Mahle (3-6) had seven strikeouts and allowed three runs and four hits in 6 2/3 innings. It came two starts after Mahle pitched nine hitless innings against the Arizona Diamondbacks - one of five games the Reds have lost this season when Mahle pitched and left with the lead.

Mike Yastrzemski hit his eighth homer for the Giants.

The Reds batted around in the third against Anthony DeSclafani and did all of their scoring in the frame with two outs - five of the runs coming after Votto appeared to ground out to first on a close play. First base umpire Gabe Morales called a foul ball and Giants manager Gabe Kapler came out of the dugout to argue. Votto doubled in Tommy Pham on the next pitch.

Morales was also the umpire who ruled that Wilmer Flores struck out on a check swing against the Dodgers in Game 5 of the NL Division Series last year, ending the Giants' season.

Votto scored on Matt Reynolds' ground-rule double. Albert Almora added a two-run single and Aramis Garcia - batting for the second time in the frame - had an RBI single.

Nick Senzel and Gacia each had RBI singles in the fifth.

Mahle retired nine of the first 10 batters, gave up Yastrzemski's home run leading off the fourth, then set down the next 10 in a row.

DeSclafani (0-2), who played for the Reds from 2015-20, retired eight batters and allowed seven runs and seven hits.

Reds manager David Bell was ejected for the first time this season in the ninth inning after Reynolds was called out on strikes. Bell was irate and yelled at home plate umpire Nestor Ceja for several minutes before walking off the field.

Reds: 2B Jonathan India was held out as precaution a day after getting hit in the wrist by a pitch. ... IF Kyle Farmer was rested. ... RHP Alexis Diaz (biceps tendinitis) threw a bullpen session before the game and will throw another Wednesday. ... LHP Nick Lodolo (lower back strain) will make a fourth rehab start with Triple-A Louisville on Wednesday.

Giants: SS Brandon Crawford was placed on the 10-day injured list because of left knee inflammation. Yermin Mercedes was called up from Triple-A Sacramento to replace Crawford.

Reds: RHP Luis Castillo (2-4, 3.71 ERA) faces the Cubs on Tuesday in the opener of a three-game series at Wrigley Field. Castillo has eight wins in 15 career starts against Chicago, including a 4-3 victory on May 25.

Giants: LHP Carlos Rodon (6-4, 2.70) goes against the Tigers on Tuesday. Rodon has allowed one run over his past 21 innings.