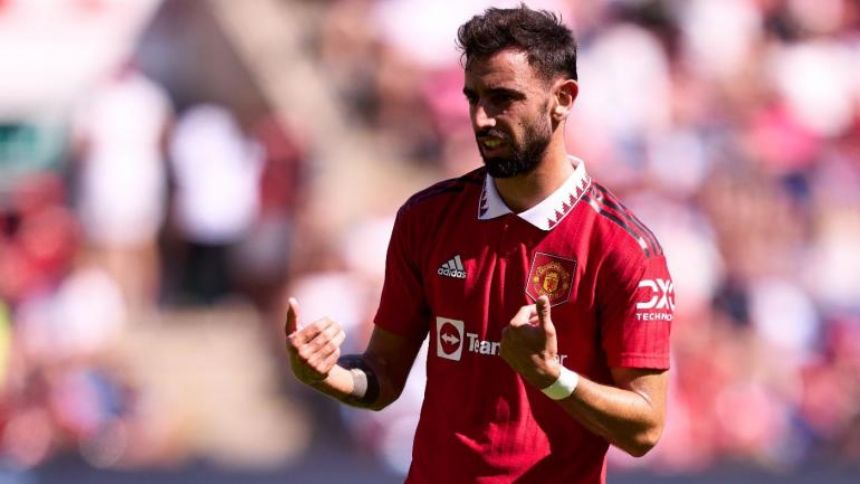 hope to make it three straight wins on Thursday when they visit struggling for a 2022-23 English Premier League match. Manchester United (2-0-2) rebounded from two ugly losses to start the season with a stunning 2-1 victory against , followed by a 1-0 victory at on Saturday. Manager Erik ten Hag has kept all-time top goal scorer on the bench to start three of the four matches, and the 37-year-old is seeking a relocation. Leicester (0-1-3) started the season with a 2-2 draw against but have lost three in a row, including a 2-1 setback Saturday against shorthanded . '

Kickoff is set for 3 p.m ET at King Power Stadium in Leicester, England. Caesars Sportsbook lists United as the +105 favorite (risk $100 to win $105) on the 90-minute money line in its latest Leicester City vs. Manchester United odds. Leicester is listed as the +240 underdog, a regulation draw at +270 and the over/under for total goals scored at 2.5. Before you lock in your Manchester United vs. Leicester City picks, make sure you check out the English Premier League predictions from proven SportsLine soccer insider Martin Green.'

After working in the sports betting industry for several years, Green became a professional sports writer and handicapper and has covered the game worldwide. Since then, his European soccer picks have been stunningly accurate. Green has generated almost $35,000 for $100 bettors since the 2017-18 season, and he is 9-7 on his past 16 EPL picks. He has his finger on the pulse of the game all over the globe.

Why you should back Manchester United'

The Red Devils needed a jolt of confidence, and they got it with the stirring victory against Liverpool. They held the ball for just 29% of the match but were dangerous on the counter-attack and equaled the Reds' five shots on target. and scored in that match, and got the winner against Southampton. The 27-year-old Fernandes looks more dangerous when fellow star is on the bench. He had 18 goals and 12 assists the season before Ronaldo returned to Manchester United.

Ronaldo had 18 last season, while Fernandes had 10 goals and set up six. The aging Ronaldo can still provide brilliance off the bench, and the Man U attack could find more success against the Foxes. Leicester City have conceded 10 goals in the four matches, and stalwart goalkeeper has moved on. Replacement has saved just six of the 16 shots on target he has faced (37.5 percent).' '

Why you should back Leicester City

The Foxes haven't had success so far, but they have the talent to challenge a shaky Man U defense. They also are unbeaten in the past four league meetings (2-2-0), including a 4-2 win at King Power Stadium in October. and both scored in that match, and while neither has found the net this season, they combined for 21 goals in 2021-22. Vardy has scored at least 15 in five straight seasons, so he is due for one, and he has two assists. is nearly as unstable as Ward, saving just 65 percent of the shots he's faced (13 of 20).

Tielemans, and are a strong engine for the attack featuring Vardy. Maddison has scored twice this season, and the team hopes he will be fit after missing out last week. Barnes scored the lone goal in the Chelsea loss. Leicester has taken the lead in both home games but couldn't close out a victory. They should have chances against United, which has allowed 63 shots, fifth-most in the league. Eight of Man U's 12 losses last season came on the road, and 10 of the Foxes' 14 victories (and 34 of their 52 points) came at home. ' ' ' ' '

How to make Leicester City vs. Manchester United picks

Green has scrutinized the Leicester City vs. Manchester United match from every angle, and he is leaning Over on the goal total. He also provides his two confident best bets and has a full breakdown of the match. He's only sharing his coveted Premier League picks here.

So, who wins Manchester United vs. Leicester City? And where does all the betting value lie? Visit SportsLine now to see the best bets for Leicester vs. Man U match, all from the European soccer expert who has generated almost $35,000 for $100 bettors over the past four seasons, and find out.