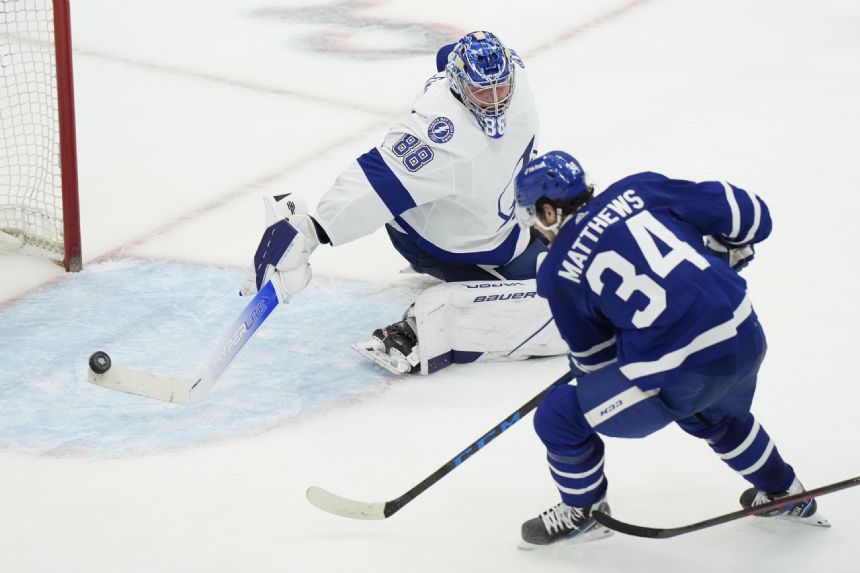 TORONTO (AP) - Auston Matthews scored the tiebreaking goal with 6:06 left in the third period and the Toronto Maple Leafs rallied from an early two-goal deficit to beat the Tampa Bay Lightning 4-3 on Tuesday night and take a 3-2 lead in the first-round playoff series.

William Nylander added a goal and two assists for Toronto, which is a victory away from advancing in the postseason for the first time since 2004. John Tavares had a goal and assist, and Morgan Rielly also scored. Jack Campbell stopped 32 shots.

Steven Stamkos, Victor Hedman and Ryan McDonagh scored, Nikita Kucherov had two assists and Andrei Vasilevskiy made 22 saves for the two-time defending Stanley Cup champion Lightning, who will try to avoid elimination in the best-of-seven series in Game 6 at home on Thursday night.

Game 7, if necessary, would be in Toronto on Saturday.

The series has yet to see a team secure a road win. With the Game 5 win, the Hurricanes have two chances to close out the Bruins. Game 6 is Thursday in Boston, and Game 7, if needed, on home ice Saturday.

Connor Clifton scored and Jeremy Swayman made 33 saves for Boston.