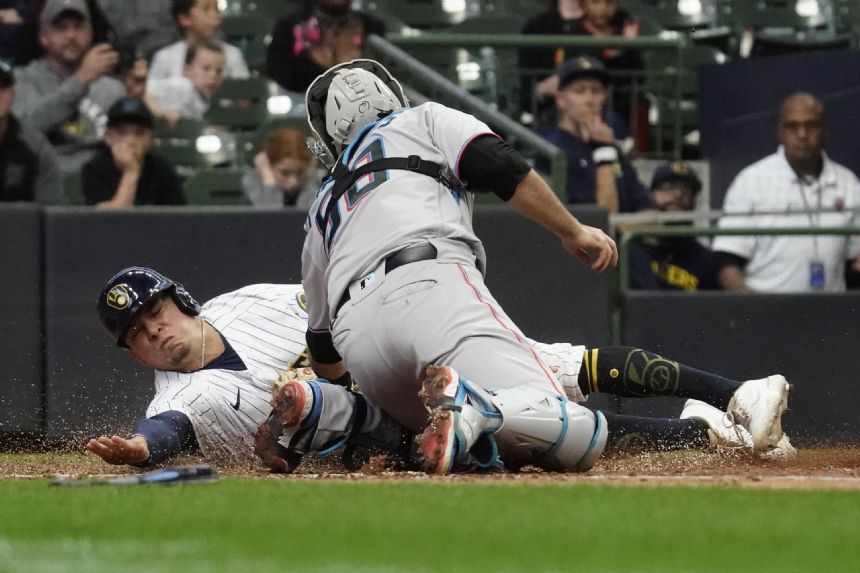 MILWAUKEE (AP) - Miguel Rojas knocked in the go-ahead run in the top of the 12th inning to give the Miami Marlins a 4-3 win over the Brewers on Sunday, deflating Milwaukee's playoff hopes in the race for the final National League wild-card spot.

Milwaukee (84-75) is two games behind the Philadelphia for the third NL wild card. The Phillies, who beat the Washington Nationals 8-1 in a rain-shortened game Sunday, hold the tiebreaker with the Brewers and both clubs have three games left.

JJ Bleday started the 12th at second for the Marlins, advanced on a ground out and scored when Rojas laced a base hit through the infield off Trevor Gott (3-3).

Tyrone Taylor started at second in the Brewers' half of the 12th. Tanner Scott, the fifth reliever used in the game, struck out Victor Caratini but walked Christian Yelich. Willy Adames flied out. Keston Hiura struck out to end the game that took 4 hours and 12 minutes. Scott picked up his 20th save of the season.

Huascar Brazoban (1-1) worked out of a bases-loaded jam in the bottom of the 11th when Tyrone Taylor hit into a fielder's choice.

Marlins starter Pablo Lopez turned in seven strong innings for the Marlins. He walked Yelich to start the game, but then retired the next 12 batters before Kolten Wong reached on an infield hit.

Lopez allowed two hits, walked three and struck out seven in his final start of the season. He turned a 2-0 lead over to Richard Bleier to start the eighth, but the Brewers didn't go quietly.

Urias singled, took third on Taylor's pinch-hit ground-rule double and scored on Yelich's groundout. Dylan Floro took over for Bleier with two outs and struck out Adames to end the threat, but then let the Brewers tie it in ninth.

The Marlins took three of four from the Brewers, who have lost for the fifth time in the last seven games.

Brewers: Milwaukee closes out the regular season at home, with RHP Brandon Woodruff (13-4, 3.05) looking to extend his franchise record of four consecutive games with 10-plus strikeouts. The Arizona Diamondbacks will throw LHP Tommy Henry (3-4, 5.98).