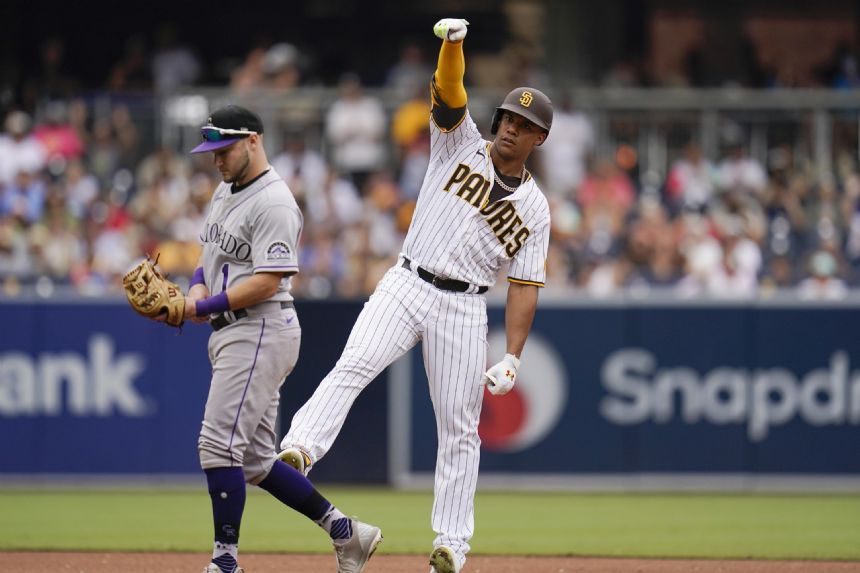 SAN DIEGO (AP) - Ryan McMahon hit a three-run homer off Joe Musgrove and drove in five runs for the Colorado Rockies, who beat Juan Soto and the San Diego Padres 7-3 Thursday to avoid a five-game sweep.

The Padres didn't give the crowd a lot to cheer about compared to Wednesday night, when a sellout crowd gave Soto multiple ovations in his first game with San Diego since the blockbuster trade that brought him and Josh Bell over from Washington on Tuesday. The Padres won that game 9-1 as fellow newcomer Brandon Drury hit a grand slam on the first pitch he saw with the Padres.

Soto did have a triple and double and scored one run Thursday. The 23-year-old superstar got a break on a triple off Kyle Freeland (7-7) leading off the sixth when right fielder Charlie Blackmon and center fielder Yonathan Daza let his fly ball fall in between them while Soto chugged around the bases. Bell singled in Soto and eventually scored on Austin Nola's single.

Soto doubled with two outs in the seventh and was stranded.

Freeland won his third straight start, holding San Diego to two runs and six hits in 5 2/3 innings. He struck out seven and walked four. Freeland loaded the bases with two outs in the fifth and then got Manny Machado to fly out to left.

Musgrove (8-5) struggled in his first start since signing a $100 million, five-year contract on Monday and lost his fifth straight decision over seven starts. The big right-hander allowed six runs and eight hits in 4 2/3 innings, the first time this season he didn't make it through five innings. He struck out six and walked one.

McMahon hit a two-run double with two outs in the third and was thrown out trying to take third. His three-run homer with two outs in the fifth gave the Rockies a 6-0 lead and chased Musgrove. It was his ninth homer. It came two batters after Jose Iglesias hit an RBI double over Soto's head in right.

Rockies: RHP German Marquez (6-9, 5.29 ERA) is scheduled to start Friday night in the opener of a three-game series at Arizona against LHP Madison Bumgarner (6-10, 3.83).