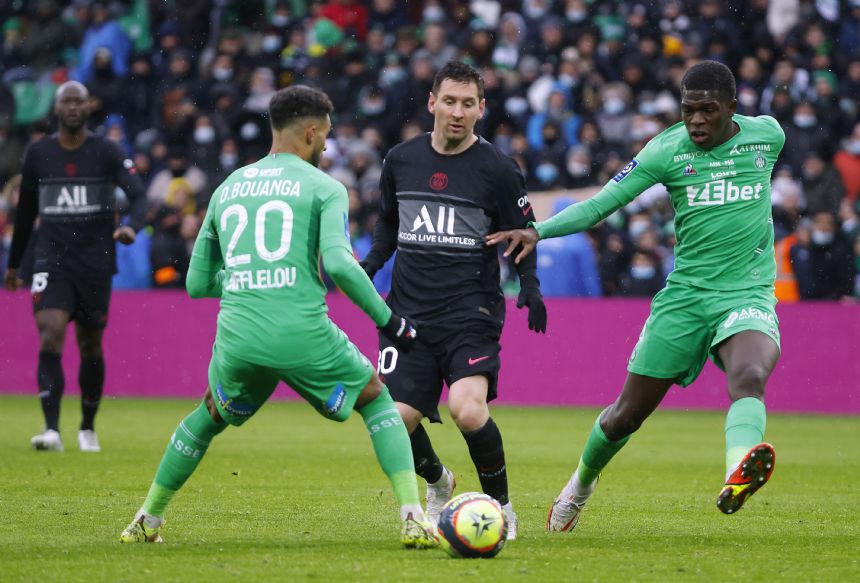 SAINT-ETIENNE, France (AP) - Lionel Messi had three assists in a 3-1 win over 10-man Saint-Etienne on Sunday to help Paris Saint-Germain extend its lead atop the French league standings to 14 points but the victory was marred by a Neymar injury.

The Brazil striker was stretchered off in the 87th after twisting his ankle under an awkward challenge from Yvann Macon.

Saint-Etienne opened the scoring against the run of play in the 23rd minute of the game played in snowy conditions. Wahbi Khazri picked out Timothee Kolodziejczak, whose shot was saved by Gianluigi Donnarumma. But the rebound fell to Denis Bouanga, who beat the Italy goalkeeper.

But Saint-Etienne's task was made much harder on the stroke of halftime when Kolodziejczak was sent off for tripping Mbappe, who was chasing a through ball from Angel di Maria. Brazil defender Marquinhos equalized by heading home the subsequent free kick taken by Messi.

Despite its numerical superiority, PSG struggled to find the winning goal. Green denied Neymar in the 69th and Messi failed to convert the rebound.

PSG eventually took the lead in the 79th when Messi found Di Maria, who curled into the far corner. In stoppage time, Messi crossed for Marquinhos, who outjumped Miguel Trauco to head in.

The game also featured the debut of Sergio Ramos, who recovered from injury to make his first appearance in the French league for PSG. The Spaniard went on to have a comfortable afternoon despite picking up a couple fouls.

The 15th round ends Sunday with Bordeaux vs. Brest, Lorient vs. Rennes, Monaco vs. Strasbourg, Reims vs. Clermont, Montpellier vs. Lyon, and Marseille vs. Troyes.

On Saturday, bottom side Metz stunned second-placed Nice 1-0 while the hopes of defending champion Lille to get back in the race for European spots took a blow after drawing with mid-table Nantes 1-1.

On Friday, Lens drew with Angers 2-2 to stay fourth.