Mets vs. Brewers won't be as close as expected, plus other best bets for Tuesday 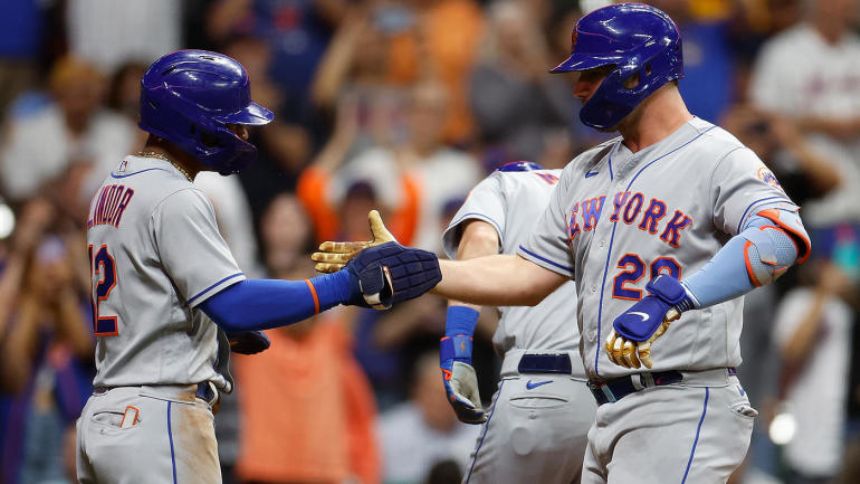 Good afternoon everyone, it's Chris Bengel returning to your inbox yet again.

You know what the NFL should do? Have two Monday games every week. I've got to say that Monday night was one of the most enjoyable evenings of football that I've sat through in a long time. Part of that may have had to do with the fact that my Eagles completely shut down the Vikings, but it was also nice to have two games to flip back-and-forth between. I wouldn't hate it if we saw this scenario more often and I doubt you would either.

With football in the books for a few days, let's jump into the baseball picks for tonight.

Tuesday's contest between the Mets and Brewers is being forecasted as very close. I don't believe that it should be and I'm riding with the National League East-leading Mets in this spot.

Mets starting pitcher Carlos Carrasco has been victorious in each of his last two starts. During those two outings, he has yielded a grand total of two earned runs on eight hits while striking out 17 batters. Carrasco looked spectacular against the Pirates in his last start as he struck out 11 and was incredibly efficient.'

Meanwhile, left-hander Aaron Ashby has gone through a brutal stretch. The Brewers have lost the last seven of Ashby's starts and he has surrendered 12 earned runs over his last three starts. During the 2022 season, Ashby has put together a less-than-stellar 2-10 record to go along with a 4.58 ERA. The Mets rank in the top five across the majors in batting average, runs, hits and on-base percentage. I'm easily backing the favorite.

The Pick: Under 11.5 Runs (-115):'-- Coors Field has always been a haven for a boatload of runs on a daily basis. However, out of principle, I'm more than comfortable betting the under in a game between two underachieving teams.

At first glance, the over may be enticing based on the pitching matchup. But Rockies starter Kyle Freeland (despite his 4.43 ERA) has allowed just two earned runs over his last three starts and been victorious in two of those starts. The Giants are sending opener John Brebbia to the mound on Tuesday. On the season, he has only lasted more than one full inning on five occasions. However, the 32-year old has been effective as he owns a 2.90 ERA and has registered 49 strikeouts in 69 appearances.

I'm just not trusting these two offenses to light it up to the tune of 12 runs between them.

Mariners at Athletics, 9:40 p.m.'| TV: MLB.TV
The Pick: Luis Castillo Over 7.5 Strikeouts (-105):'-- The Athletics have been brutal all season and own the second-worst record in the majors. With how anemic their lineup can be, this seems like the perfect spot to take Luis Castillo's strikeout prop.

Castillo has pitched very well since coming over from the Reds at the trade deadline. The right-hander has recorded at least eight strikeouts in three of his last four starts. As a Mariner, he's registered at least eight strikeouts in five of his eight starts. Castillo has also pitched at least six innings in all but two of those starts, so the Mariners ace will likely be able to go deep into the ballgame. It doesn't hurt that the A's rank 11th in baseball in strikeouts (1,273) on the season).

Key Trend: Castillo has registered at least eight strikeouts in three of his last four starts